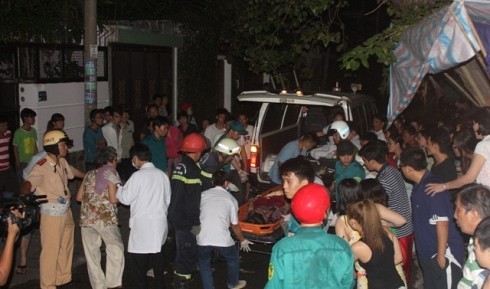 Regulations called for use of explosives in art, sports activities

The Ho Chi Minh City People’s Committee recently proposed that the Ministry of Culture, Sports and Tourism issue regulations on the use of explosives in art and sports activities to prevent accidents, casualties, and property damage.

The committee elaborated that the loose control over the use of explosives in art and sports activities has resulted in several fatal accidents recently.

As of right now there are no regulations on the use of explosives in these two areas.

Movie props were confirmed to be the cause in the twin blasts that destroyed three houses, killed 11 people and critically injured many more on a residential street in Ho Chi Minh City’s District 3 in February.

The explosions occurred at a house hired by Le Minh Phuong, who was said to be in charge of creating smoke and fire effects for movies produced by the local Lac Viet film studio, to store his movie props. Phuong was among the dead.

Some extreme football fans occasionally set small fires in the arenas, though no serious damage or casualties have been caused so far.