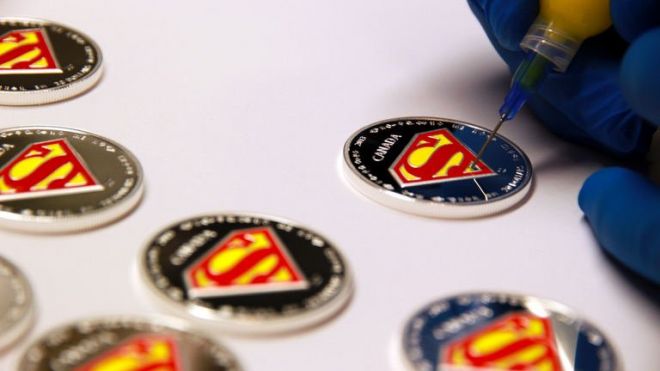 Now that's a birthday present: Canada is honoring Superman with seven coins to mark the 75th anniversary of the iconic comic character's creation.

The Royal Canadian Mint said Monday it would be issuing the collector's items -- ranging in face value from 50 cents to $75 -- in gold, silver and cupro-nickel.

Prices range from Can$29.75 (US$28.7) for the cupro-nickel coin and an accompanying stamp to Can$750 for the 14-carat gold coin, which boasts a color image of Superman and is being billed as the first of its kind. Only 2,000 coins of this type will be up for grabs.

"The generations of young people who grew up reading Superman comics may not have fully appreciated the story behind them," Immigration Minister Chris Alexander said in a statement marking the launch in Toronto.

"Our government celebrates Canada's history and heritage and the very values and strengths that Superman embodies."

Superman, who first appeared in 1938, was co-created by Canadian Joe Shuster and US collaborator Jerry Siegel.