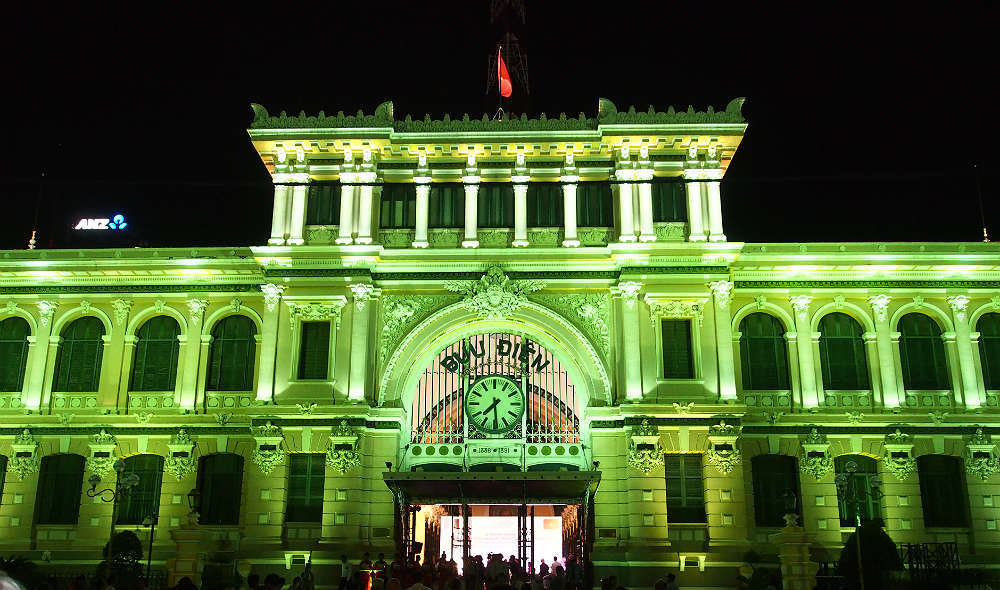 The Ho Chi Minh City Central Post Office has received a facelift with support from art lighting experts from the French city of Lyon.

The new illumination of the Central Post Office in Ho Chi Minh City, conducted by the department of public lighting of the city of Lyon, was officially unveiled at 7:30 pm Sunday.

The 120-year- old HCMC Central Post Office building, formerly known as the Saigon Post Office, is an example of French-style architecture with unique value in HCMC and is a well-known tourism site.

Previously, the frontal public lighting system of the building was merely security lighting for traffic safety.

This is part of the decentralized cooperation policy implemented by the Lyon municipality for the development of its international outreach and dissemination of its expertise in the field of public lighting.

This event took place within the framework of the Year of France in Vietnam, organized on the occasion of the fortieth anniversary of the establishment of diplomatic relations between the two countries.

Speaking at the ceremony, Mr. Le Hoang Quan, Chairman of the People's Committee of Ho Chi Minh City, said the inauguration ceremony of the art lighting project is vivid evidence of the good relationship between Vietnam and France, and is an important point in the sequence of events to celebrate the 40th anniversary of bilateral diplomatic ties.

Appreciating the significance of the operational art lighting system for the building, Mr. Gilles Buna, Deputy Mayor of Lyon, said this work was part of a series of activities of the “French year in Vietnam” program, expressing the profound relationship in various fields between the two countries, in general, and the city of Lyon and HCMC, in particular.

The project has helped embellish and enhance the value of the architectural and cultural landmarks of the city, and demonstrate the strong growth in diversity of Ho Chi Minh City.

Before this project, the expert team from Lyon supported HCMC in applying art lighting to the Nha Rong Wharf Museum (1997), HCMC Opera House (2008) and the HCMC People’s Committee building (2004).

While talking about further cooperation between the two cities in the future, the Consul General of France said there will be many activities held to boost cooperation in many areas, including tourism and culture in HCMC, from now to year-end.