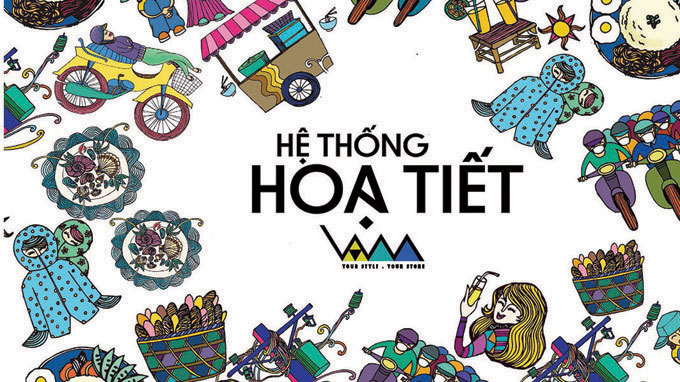 Two students from the Ho Chi Minh City University of Architecture and Saigon Technology University, with the aid of their lecturer, recently presented their ideas which help Vietnamese history reappear as their graduation thesis.

“Phap lam” is known as enameled and burnt bronze, which is made using complex and expensive integrated engineering. It is often used in palaces and tombs as objects of worship and exterior and interior decorations.

In 1827, King Minh Mang brought “phap lam” to Vietnam by hiring Chinese artisans to make the products and share their skills. It helped create the very first generation of Vietnamese applied art artists in decorating and doing interior design. The decorative handicraft products which were used in the Nguyen dynasty (1802- 1945), the country’s last monarchy reign, have been named “Hue’s phap lam” since then, according to the online historical documents.

This unique heritage, which had been lost for more than 100 years, becomes Huynh Hieu Nhan’s strong inspiration which motivates him to create lots of artworks describing a noisy but lovely Saigon. Hieu Nhan’s work is seen as successful as he was able to combine the “traditional” and “modern” concept, a thing that is hard to achieve in most previous applied art artworks.

At the age of 20, Tran Han Phong realizes the importance of the genealogy and its role in connecting family members. By linking the idea with the current trend of many young people using the Internet, Han Phong made an online genealogy website under the form of a social network.

In Vietnam, this is the first time an evolutionary tree, which has been in existence for many years, has been transferred to a social network format. It is expected to connect family members and make them proud of their ancestors as well as their family history and culture.

The page allows its users to share and exchange private information among their community and reminds them of special occasions including birthday, wedding, anniversary or graduation. The benefit attracts attention from youths and encourages adults to consolidate the relationship between family members.

Nguyen Phan Thuy Duong is a shining example of a person who used to study abroad and wished to return to her homeland to share with her juniors all the experience that she has learnt from an advanced learning environment.

Graduating from Savannah College of Art and Design, one of US top universities, Duong’s wish finally comes true as she is currently a lecturer of the Ho Chi Minh City University of Architecture where she used to study before.

In teaching arts, sharing skills is the most effective method. Accordingly, lecturers have great impact on their students as they often learn from them by observing their behaviors, personalities, skills, professional reputation and their actual products as well.

“He is a person who has an acute observation, a good aesthetic sense and a plentiful inner. He also makes a lot of effort in researching and learning,” Duong remarked on her student Nhan “phap lam.”

Describing Phong “genealogy”, Duong said he has a rare self-study ability and is sober-minded and careful.  Each of his projects is a “predictable surprise.”