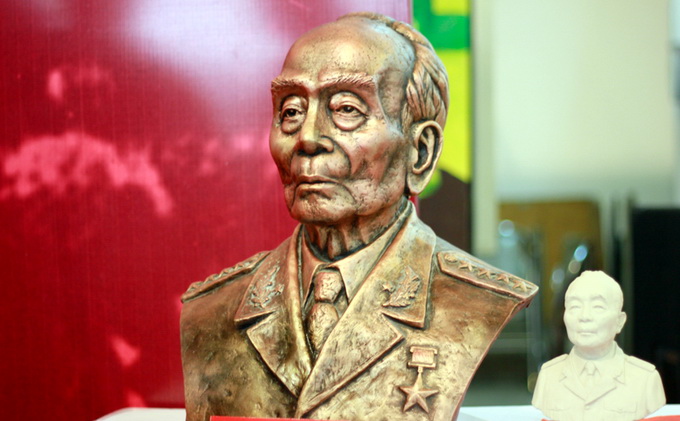 An exhibit, which runs in Hanoi until Jan 7, showcases photos and statues of legendary general Vo Nguyen Giap to mark his 100-day death commemoration.

The exhibit, going on at 45 Trang Tien, features 103 black and white and colored photos of the general. The photos, which are picked from some thousands ones taken by veteran photographers, capture Gen. Giap in historic and daily life moments, alone or with late President Ho Chi Minh, soldiers and people.

Also on display are archival materials from the Vietnam Military History, Air Defense and Navy Museums.

The exhibit also boasts sketches and portraits of the revered military leader by famed artists, as well as shorthand documents by colonel Le Duy Ung, who sketched late President Ho with his own blood when he suffered serious injury to his eyes.

Visitors will, for the first time, have the chance to take a look at the vases made from time-honored Chu Dau pottery. The vases bear Gen. Giap’s words in his own handwritings which extol the traditional art in northern Hai Duong province.

Vo Nguyen Giap, the first four-star general and the former commander-in-chief of the Vietnam army, died on Oct 4 at the 108 Army Hospital in Hanoi, more than a month after he celebrated his 103rd birthday.

He started his career as a history teacher before joining the army to become a legendary general who led the Vietnam Army to defeat the French and US invaders in 1954 and 1975 respectively.

His funeral, the largest in Vietnam for decades, attracted thousands of locals who queued for several hours to pay tribute to the general. People are still visiting his resting place in Quang Binh province.