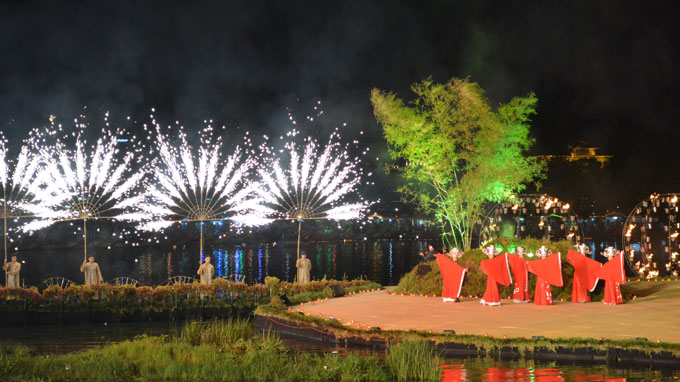 The 2014 Hue Festival wrapped up in central Hue City on Sunday, ending a successful festive time, yet leaving behind questions on whether the festival has come up to its expectations.

The festival boasted almost 100 art and cultural shows, some 170 performances, and dozens of extra activities such as exhibits, seminars, fairs and exchanges, and gathers roughly 1,400 artists from 38 countries around the globe.

According to the organizer, this year’s festival was the largest-scale event compared to its predecessors, as it showcased the largest number of shows in a wide variety of genres, which took place across Thua Thien – Hue Province, whose capital is Hue City.

Unlike in previous years, when most quality shows were held at ticket-selling venues, this year many of them were brought to community stages in parks, on sidewalks, in new residential areas, and even in rural and mountainous places.

Many locals and domestic and international tourists did not watch on but actually got involved in the performances.

This is considered one of Hue Festival’s distinctive features.

According to the Hue Festival organizer, the city received over 2.4 million visits during its nine-day hallmark festivities, including more than 22,000 foreigners.

One of the festival’s successes is the creation of a cultural and art feast which featured the province’s cultural identity as well as those from other countries.

Debuting in 2000, Hue Festival has emerged as a unique, culture-rich feast in recent years when Vietnam has been inundated with some 8,000 traditional fests annually held in various scales throughout the country.

According to Ngo Hoa, vice chair of the provincial People’s Committee, head of the 2014 Hue Festival organizing board, the festival cost over VND40 billion (US$1.89 million), the largest investment compared to its previous editions.

The sponsorship and revenues have covered more than 60 percent of the sum, with the province paying only VND16 billion, mostly for equipment installation and accommodations for artists.

Hoa affirmed that the festival has seen major improvements since its debut.

Visitors to this year’s grand event rose by 25 percent compared to 2012, he noted.

However, Hoa pointed out that as the festival aims to promote the image of Hue and Vietnam to the world in a long-term strategy, its success can by no means be measured by a mere nine day period or by its profitability.

Several weaknesses of this year’s festival have also been identified.

Director of a tour provider in Hue revealed that though the festival was covered profusely in the local media well before the event took place, foreign media hardly reported on it.

Seven foreigners interviewed by a Tuoi Tre reporter all said that they had not known about the festival until they arrived in Hue.

Tien Ca, a Hue native who has been living in Ho Chi Minh City for over 20 years and joined every Hue Festival since 2000, suggested that the festival organizer should provide tourists with more information on the shows and artists.

The organizers should also brief visitors on the shows’ content and how to enjoy them, apart from distributing brochures, which were handed out only to ticket buyers, Ca said.

At a meeting last week, Nguyen Xuan Hoa, who served as vice head of the Hue Festival’s organizing board from 2000 to 2006, complained that the festival has been veered off course in recent years.

Instead of working on the long-term goals and tasks of the mammoth project to build Hue into the country’s typical festival city, which was approved by the Prime Minister in 2007, authorities in Thua Thien – Hue Province have focused mostly on how to improve the festival each year.

Under the project, which will conclude its second phase by 2015, the festival city model can only be realized with an adequate management mechanism, professional workforce and complete cultural facilities such as theaters or museums.