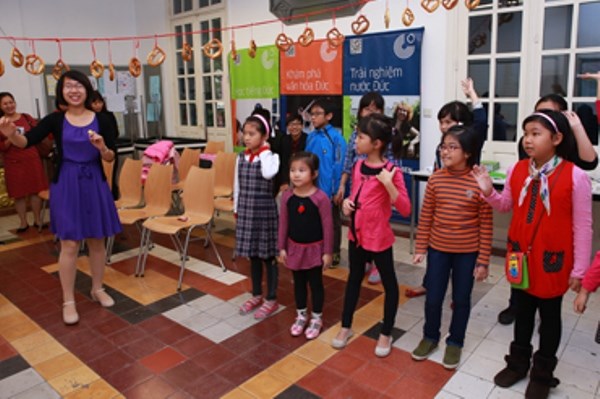 European languages day to run in Hanoi this weekend

A free event featuring different European languages and experiences  in learning and teaching the languages is set to take place in Hanoi on Saturday.

The European Day of Languages, in its fourth edition, will take place from 9am to 7pm at the Goethe Institut, 56-58 Nguyen Thai Hoc.

As in previous years, the event consists of a conference on “Innovations in Foreign Language Teacher Education” in the morning.

The conference will provide scientists, linguists and teachers of foreign languages with the opportunity to discuss and exchange experiences within their professions.

In the afternoon, the event is open to anyone who would like to experience the diversity of European languages, particularly families with children.

This year’s event includes representatives of the embassies of France, Italy and Poland, as well as the Aula Cervantes, the British Council and the Goethe-Institut.

The German Academic Exchange Service as well as the Gestión Educativa Consultore from Spain will also take part.

In the participating institutions’ 30-minute introductions, attendees will have the opportunity to learn their first words in German, English, French, Spanish, Italian and Polish, and thus gain a glimpse into the European countries’ linguistic and cultural diversity.

Those who are interested in studying in Germany, France, Italy and Spain are welcome to visit the information sessions at  the Goethe-Institut’s exhibition hall at 2 p.m.

The European Day of Languages was originally begun by the Council of Europe and is annually organized by the European Union National Institutes of Culture (EUNIC).