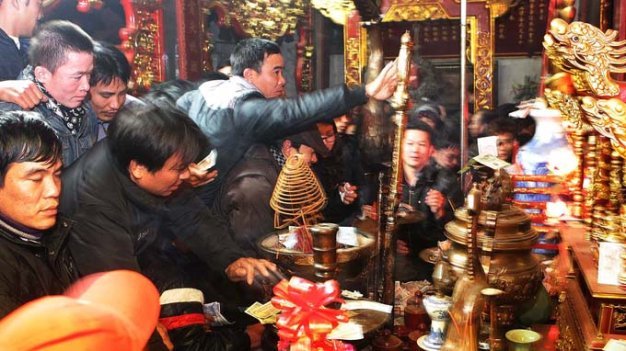 The head of the Hanoi culture department expressed in an interview with Tuoi Tre (Youth) newspaper his optimism about the overall immense benefits the draft behavior code will bring if approved.

Leaders of the Hanoi People’s Committee and relevant agencies heard the city’s Department of Culture, Sports, and Tourism report on the provisional Hanoi Behavioral Etiquette Code on Thursday last week.

The culture department had earlier handed the draft code to the People’s Committee for consideration.

It earned an “Ideas – For the Love of Hanoi” prize, part of the local Bui Xuan Phai Awards, last year.

The code is an attempt to improve the behavioral cultures adopted by individuals at state institutions and public areas, which are in fact on a downward spiral.

While a number of experts and Tuoi Tre readers have voiced doubt about the code’s effectiveness, To Van Dong, head of the city’s culture department, is quite confident. Dong said that the code is a must, considering that Hanoi – with its 1,000-year-old history and rich, elegant culture – is representative of the entire country’s traditions, lifestyles, and cultural values.

The Vietnamese Ministry of Culture, Sports, and Tourism reported Friday on its website that the city ranks tenth in the list of the 10 most culturally rich cities in the world issued by Lifehack, a website which provides tips that help people have a productive, happy, and better life.

However, people living and working in the capital have yet to live up to expectations regarding lifestyle, behavior, and attitude.

In recent times people, particularly the young, have expressed worrying attitudes, including indifference to others’ suffering, dressing scantily and swearing in public or solemn places, rampant littering and urination in public areas, disobedience of traffic laws, and rude, aggressive behavior which may easily escalate into brawls, Dong observed.

According to the city’s culture department, among the 6,000 questionnaires handed out to locals as part of the project to prepare the code, hospitals top the list of locations with the most inappropriate behavior.

Over 90 percent of the respondents said that doctors, nurses, patients, and their relatives have adopted inappropriate manners, most notably doctors’ and nurses’ inconsiderateness toward their patients.

Ninety-five of the respondents said that civil servants also do not behave properly. Dong said that misbehaviors at public agencies include bribery, discrimination, tardiness, envy of colleagues, and responsibility shifting.

Many staffers at administrative agencies still act impolitely toward locals, or fail to provide them with sufficient information.

The questionnaires handed out at local schools also indicated that 50-70 percent of the schools’ leaders, teachers, staff, and students still display improper etiquette.

“In my opinion, the code will serve as a key benchmark if the attitudes of people living in Hanoi are to be improved. It will have an immense impact on every facet of the capital’s life and thus shouldn’t be applied hastily if approved,” Dong asserted.

However, the official also underlined the significant role of citizens’ awareness in the success of the code.

According to Dong, once approved by the People’s Committee, the implementation process will be divided into two phases.

Phase 1, from 2015 onward, will see the planning of instructions to help localities and agencies apply the code.

A penalty system and solutions to enhance the code’s applicability and effectiveness will be completed by the end of phase 2 in 2020.