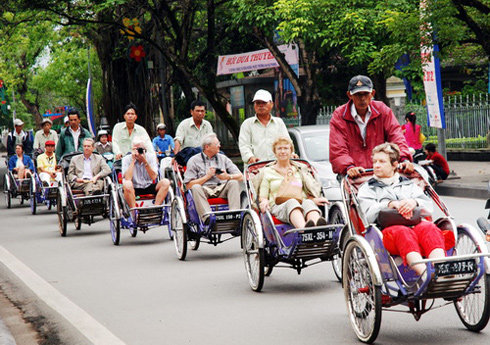 Authorities in Hue City – Vietnam’s former imperial capital located in the central region – announced on Wednesday that four local companies have spent over VND14 billion (US$659,000) renovating a pedestrian street in time for the New Year.

The renovated street is expected to be open to the public to usher in the New Year 2015.

The investors have erected three welcoming arches at the ends of the street which feature intricate decorative patterns inspired by traditional art.

The houses will serve as spots for visitors to learn about tourism services, shop for fine art items, and relish specialties.

Tuan added that the city signed just a two-year contract with the investors, and will decide whether to allow them to invest in the long run or not after the detailed planning of the Huong River’s surrounding areas is complete.

Hue is now the capital city of Thua Thien-Hue Province.

Meanwhile, authorities in central Quang Nam Province, just to the south of Thua Thien-Hue, announced late last week that the province will provide partial funding for households living in the peripheral areas of its UNESCO-recognized Hoi An Ancient Town to revamp their houses.

According to Nguyen Chi Trung, director of the Hoi An Ancient Town Preservation Center, previously only owners of houses in the old town’s core received funding for restoration due to limited budget.

The houses in the peripheral areas also boast traditional architectural styles which are also considered worthy of preservation, he added.

The new funding is an attempt to restore the overall appearance of Hoi An Ancient Town, Trung noted.

It was chosen as the world’s best tourism place by British tourism magazine Wanderlust in January 2013.