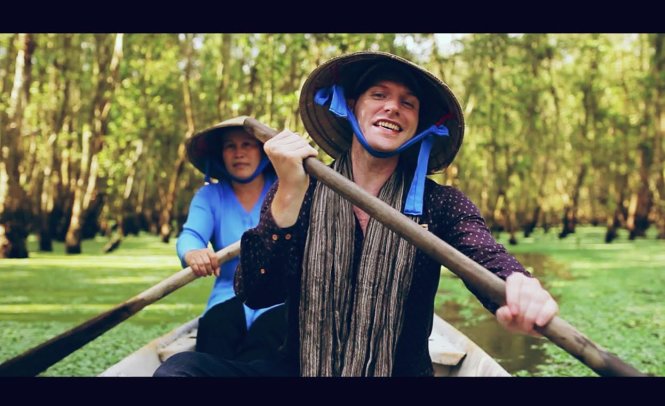 An American singer/teacher, who is known for his alluring performances of Vietnamese songs, launched on Sunday a cover of a British-Irish pop boy band’s hit song against the background of the Mekong Delta’s rustic scenery.

Kyo York, who speaks impeccable Vietnamese, released his cover version of “What Makes You Beautiful” – a hit song by One Direction.

One Direction, commonly known as 1D, is a boy band based in London.

York’s new music video features him rowing a sampan or riding on it through the crisscrossing canals and rivers in the Mekong Delta, or singing with cottages and a local alley in the background.

The singer, who has lived in Vietnam for over four years and considers the country his second homeland, said that he created the video on the spur of the moment during a performing trip to several Mekong Delta provinces in southern Vietnam.

“Most of the scenes in the video were shot by myself or my group mates. I’m infatuated with the pastoral landscape in Vietnam’s rural areas after spending quite some time performing and teaching English there. The infatuation served as a catalyst for the impromptu production,” York said.

The American released in June last year another music video titled “Que Bac Ba Phi” (Uncle Ba Phi’s Hometown), which showcases the Mekong Delta’s gorgeous landscapes and specialties, and captures the moments he spent with local people against the background music of the Vietnamese song sung by himself.

York has become a household name to most Vietnamese TV viewers thanks to his appearances as a contender, host, and coach on several game shows.