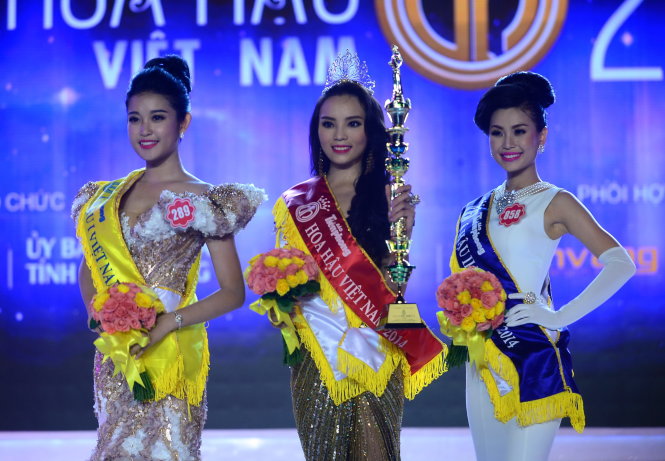 Miss Vietnam Nguyen Cao Ky Duyen have come under fire for her appearance since she was crowned in the finale last week.

Duyen, 18, a freshman at the Hanoi Foreign Trade University, was coronated on Saturday on the final night of Miss Vietnam 2014, which took place on an outdoor stage at Vinpearl Land on Phu Quoc Island in the southern province of Kien Giang.

Shortly after her coronation, during which the beauty queen was so nervous that she dropped her crown to the ground, she was bombarded with harsh criticism, including malicious caricatures, from netizens.

The beauty who hails from Nam Dinh Province in the north even deactivated her Facebook account only two hours after the pageant.

Many audience members who attended the finale muttered in dismay at the announcement of the final result, as they strongly believed Nguyen Tran Huyen My, who boasted a purely Vietnamese gorgeous face and stunning height, would be crowned instead of ending up as the first runner-up.

Social networks also heated up with overwhelming comments from people expressing their frustration at the new beauty queen.

They claim that except for her name, which resembles that of a much-loved Vietnamese expat beauty in her late 40s, there is nothing special about Duyen and her outside appearance is humbled by that of other finalists at the pageant, particularly the first runner-up.

Some even said Duyen’s beauty is the most modest throughout the prestigious pageant’s history.

Netizens were outraged to learn that the evening gown Duyen wore during her coronation bears a striking resemblance in style, texture and color to that worn earlier by Nguyen Cao Ky Duyen, who the young girl was named after.

Nguyen Cao Ky Duyen is a lawyer and host of U.S.-based Thuy Nga Center’s “Paris By Night” concert program, which is a household name to most Vietnamese expats.

She is a high-profile daughter of Nguyen Cao Ky, a vice president of the former Saigon regime, who passed away some years ago.

According to Tin Tuc Online, Huynh Hong Khai, another finalist, supposedly pursed her lips as a sign of contempt when Duyen’s name was called out as the new beauty queen.

However, Duyen also has many proponents.

Nguyen, a Tuoi Tre reader, expressed his support for Duyen, as he believes she boasts both inner and outside beauty.

The young woman drew public attention with her effective weight loss process, which helped her drop her weight from 70kg to 59kg prior to the contest by keeping to a strict training regime and diet.

She outshined the four remaining contestants in the top five in the last Question and Answer session for her smart answer regarding the virtues of Vietnamese women.

The beauty won the Sea Pageant title as well.

Proponents also point out Duyen’s good academic record as one of her strengths, as she studied at a high school for outstanding students in her hometown.

In the press meeting held shortly after the Miss Vietnam 2014 finale, Le Xuan Son – head of the organizing board – said the final result should not come as a surprise, as it came from the entire process of assessing the beauties which spanned from the preliminary to final rounds and covered various facets, including physique, facial expression, voice, talent, tact and communication skills.

These elements accounted for 40 percent of the final score, while the percentages for the “ao dai,” swimwear, evening gown and Question and Answer sessions during the final night made up 20, 20, 10, and 10 percent respectively, Son explained.

“Audiences mostly saw the finalists onstage and through strikingly impressive photo shoots only, while the jury made regular contact and assessed them during their everyday moments throughout the pageant. Our result is thus objective and is not biased at all,” he asserted.

As a Tuoi Tre reporter observed, several other beauty queens including Ngoc Khanh, Thuy Dung, Ngoc Han and Dang Thu Thao were also blasted for their looks or shady details of their personal life shortly after their coronation in the past.

However, these beauty queens have matured remarkably over time and have met everyone’s expectations for women of such coveted titles.

Dang Thu Thao, who was crowned in the Miss Vietnam 2012 edition, has grown from a less prominent beauty in audiences’ opinions two years ago to “the queen of the beauty queens” now.

Even Huyen My, the first runner-up of this year’s Miss Vietnam pageant, who has received profuse support from audiences and netizens and is believed by many to outshine Duyen, also faces unwelcome rumors.

One of them is that she marketed facial cream with unclear origins, which users are advised by experts to stay away from, on her Facebook page.

The Miss Vietnam 2014 finale exploited the theme of the river and island civilization of the pageant’s homeland, especially the image of Phu Quoc Island, with lots of potential.

The stage was designed as a miniature of the island, covered with images of blue sea, white sand, forests, waterfalls and the sea bed, while the swimsuits of the 38 contestants were also navy blue to suit the theme of the finale.

The performance of American pop star Kelly Clarkson, which included hit songs, such as “Because of You” and “Stronger,” rocked the audience and helped elevate the level of the pageant.

Miss Vietnam is a beauty contest for young women aged 18 to 27, with the aim of finding a Vietnamese woman with natural beauty, charm and friendliness.

The crown for this year contest, worth some VND2.5 billion (US$117,500), was designed and manufactured over three months. It has been recognized by the Vietnam Guinness Book of Records as the biggest crown studded with the most natural pearls in Vietnam.

The pageant organizer has just announced that Tu Cao Thanh Thuy, who comes from Phu Quoc Island, is given an additional title.

Thuy’s award is a free one-year use of the services offered by an airline.

The airline’s representative said the title is meant to promote Phu Quoc Island and Vietnam’s tourism in general.

He added the airline is willing to recruit the pageants’ finalists as flight attendants.

Still, the girl failed to enter the finale’s Top 10 or receive any supplementary prizes.