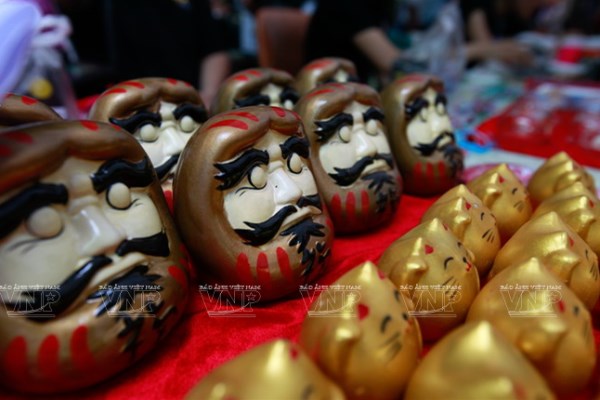 A Japanese-style traditional festival to usher in the New Year will be organized in Hanoi this weekend.

On Wednesday, the Vietnam News Agency reported the Ministry of Culture, Sports, and Tourism as saying that the Japanese New Year festival “Ake Ome! 2015” will run on Saturday and Sunday at the Vietnam Exhibition Fair Center, at 148 Giang Vo Street, Ba Dinh District.

The fest will feature stalls offering a wide range of Japanese and Vietnamese hallmark handicraft items and delicacies.

Visitors will marvel at Japan’s traditional decorative items including “kadomatsu” (bamboo and pine branches placed in pairs in front of homes to welcome ancestral spirits before and after New Year); “koinobori” or carp streamers (carp-shaped wind socks); and “hamaya” (a decorative arrow sold at shrines in the new year to ward off misfortune and to attract good luck).

Other highlights include time-honored Japanese activities to celebrate the New Year and pray for blessings such as casting lucky draws, trying on “yukata” (casual summer “kimono”), and embellishing the Daruma, which is a hollow, round, Japanese traditional doll modeled after Bodhidharma – the founder of the Zen sect of Buddhism.

Participants will also have the opportunity to join the Japanese traditional dance of “yosakoi” or dress up in cosplay programs.

The name “Ake Ome! 2015” is inspired by “Akemashite omedetou,” which means “Happy New Year” in Japanese.