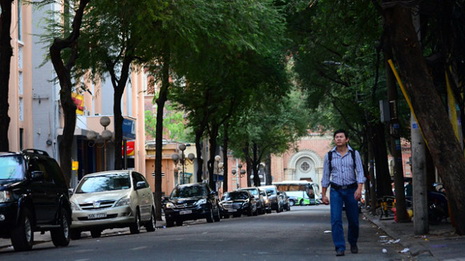 A book street for Ho Chi Minh City, why not?

Communications authorities in Ho Chi Minh City are working on a plan to establish a city book street, with a small street in the downtown area being the strongest candidate.

Le Thai Hy, director of the Department of Information and Communications, said his department and several local publishers have discussed the issue of launching a systemized book street in the city in great depth.

“Our plan to establish such a book street has recently been backed by the Vietnam Publishing Association. Hua Ngoc Thuan, vice chair of the People’s Committee, also gave the go-ahead for the plan during a meeting earlier this month,” he added.

Hy noted his department is prepared to conduct a project called “Ho Chi Minh City Book Street” in District 1 on a pilot basis this month and will later expand the model to other qualified inner and outlying districts.

Among several options, a large number of publishing insiders and book aficionados have opted for Nguyen Van Binh Street in the downtown area as their preferred venue for the future book street.

Though the street is not very long, it is located in the city’s heart, and is lined with old trees providing lush foliage.

In addition, few houses are located on the street, and its sidewalk is currently being used for automobile parking, which would mean less restoration work, proponents of the option explained.

Hy noted the proposed venue for the country’s second Book Day, which his department has just submitted to the local People’s Committee, is also near Nguyen Van Binh Street.

Vietnam’s Book Day, on April 21, is meant to encourage and cherish local reading culture, accentuate books’ value and their significance in social life, as well as to honor book collectors, writers, publishers and distributors.

The day is also expected to help boost the responsibility of competent agencies and social organizations on building and promoting reading culture in Vietnam.

It was first observed in the Southeast Asian country last year.

One of the highlights in this year’s Book Day, scheduled for April 18 to 21, is garnering readers’ opinions on the book street project, he stressed.

After that, the Department of Information and Communications, the Vietnam Publishing Association, publishers and distributors will meet to revise the plan before submitting it to the People’s Committee for approval, Hy added.

Not a far-fetched dream

Though the recurrent topic of establishing a well-organized book street in the southern metropolis has been discussed several times, it has gained heat as the country’s second Book Day approaches. An article appealing for a book street in Ho Chi Minh City written by Dr. Quach Thu Nguyet, former director of Tre (Youth) Publishing House, and posted on her Facebook page, has drawn over 300,000 likes and dozens of shares among experts and book enthusiasts in the past few days.

Dr. Nguyet stressed that a well-organized book street will also serve as a rendezvous for voracious readers and collectors of cultural rarities such as stamps, postcards and time-honored books and book covers.

She and her contemporaries nostalgically remembered that prior to 1975, when Vietnam was reunified, and sometime after the milestone, there were streets in Saigon (the former name of Ho Chi Minh City) where avid readers could find their favorites among stacks of old and new books and magazines in both Vietnamese and foreign languages.

After 1975, Dang Thi Nhu, a 200m-long street connecting Ky Con and Calmette Streets, was also home to a slew of book stalls, which were located opposite each another across a pedestrian section.

Though old book stores can now still be found on such streets such as Nguyen Thi Minh Khai in District 1, Tran Huy Lieu in Phu Nhuan District, and Tran Nhan Tong in District 10, such streets cannot really be considered book streets as the shops are scattered and not well organized.     Many local readers are enthusiastic about the prospect of such a city book street.

Dr. Nguyet urged that readers voice their support to help realize the plan.

Though highly supportive of the plan, Do Thanh, director of Nhan Tri Viet Co., a local publisher, pointed out that the book street is supposed to go hand in hand with the city’s long-term growth and bring profits to publishers and distributors; otherwise, the book street might become a burden.