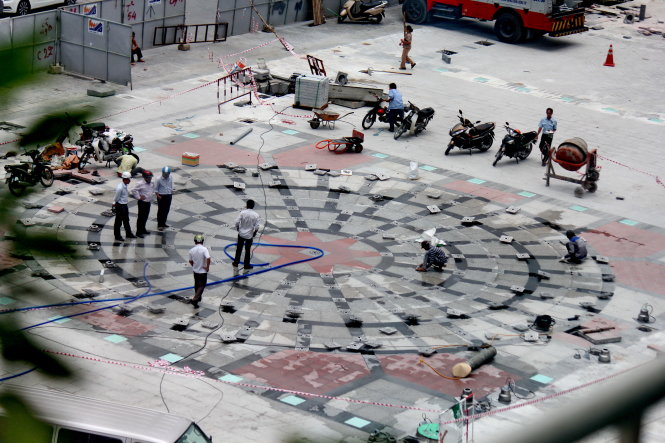 The Nguyen Hue Pedestrian Street in downtown Ho Chi Minh City has been launched on a pilot basis since Wednesday before officially opening to the public by the end of this month.

Work on the pedestrian street, located in District 1, has been almost complete, with finishing touches being given, the city’s Department of Transport announced.

It will open from now until Monday next week on the trial ground, the department said.

All the items, including the decorative lighting system, fountains, monitoring center, and underground restrooms, are now on stream.

As observed by Tuoi Tre (Youth) newspaper reporters, most of the construction tasks such as growing trees, paving floors, installing sewage systems, and erecting automatically-operated automobile stopping poles have been basically completed.

Earlier this month, the municipal People’s Committee technically agreed to the planning of 20 parking lots in District 1, which will offer services to visitors to the Nguyen Hue Pedestrian Street.

According to the District 1 People’s Committee, the lots will be capable of housing 8,400 motorbikes and nearly 900 cars of between four and over 25 seats.

The parking areas will be located in six skyscrapers in the downtown area, 23/9 and Le Van Tam Parks, and the Saigon Zoo and Botanical Garden, all situated in District 1.

According to the District 1 People’s Committee, traffic heading for the downtown area on weekends and holidays following the renovation of Nguyen Hue Street is expected to be threefold that before the work.

The pedestrian street will also boast art, exhibition and sports activities, and will be lined with mobile stands that offer for sale a wide array of mementoes and food specialties.