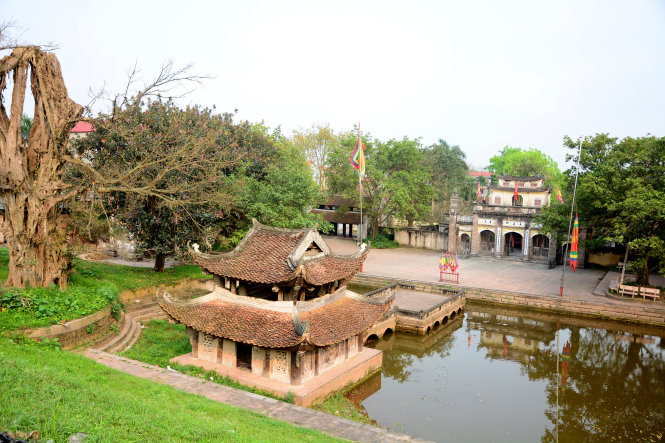 A recent trip by a Tuoi Tre (Youth) newspaper reporter has offered a fascinating glimpse of an age-old relic complex on the outskirts of Hanoi which is home to a legendary young hero and a UNESCO-recognized festival held to pay tribute to him.

Located only 20 kilometers from the heart of the Vietnamese capital, Phu Dong Commune in Gia Lam District is legendarily believed to be where Thanh Giong, one of the four immortal heroes in Vietnamese folklore, was born and defeated Chinese invaders.

As legend has it, Thanh Giong’s mother conceived him soon after she put her foot into a huge footstep.

To his mother’s and everyone else’s astonishment, the little boy insisted his mother notify the king’s emissary of his intention to defend his country against the invaders.

Within an instant, the little boy grew into a brawny young man.

After triumphing over the enemy, Thanh Giong soared from the Soc Mountain, which stands aloft in Hanoi’s outlying district of Soc Son, into the sky and has never returned since.

Locals later built the Phu Dong Temple in the neighborhood to pay tribute to the young hero.

The temple, the Ha Shrine, which was erected to pay homage to Thanh Giong’s mother, and Huong Hai and Kien Son Pagodas, make an alluring relic complex.

Among them, the Phu Dong Temple is the most imposing, solemn edifice, which is adorned with serene lakes and centennial banyan trees.

After a countryside market session, locals gather for some rest at the foot of the Phu Dong Temple. Photo: Tuoi Tre

According to the temple’s caretaker, Phu Dong had not been considered a tourist attraction until some years ago.

A spurt in tourists’ interest is perhaps put down to the UNESCO recognition as a world intangible heritage which was given to the Giong Festival in November 2010.

Held around the fourth lunar month each year, or around May, at the Phu Dong and Soc Temples, located in Gia Lam and Soc Son Districts respectively, the festival boasts diverse activities in tribute to Thanh Giong.

A local man is seen washing his mattress in a lake. Photo: Tuoi Tre

An ancient well overgrown with moss is seen inside the Phu Dong Temple. Photo: Tuoi Tre

The serene, poetically famous Duong River, one bank of which Phu Dong Temple is located on. Photo: Tuoi Tre