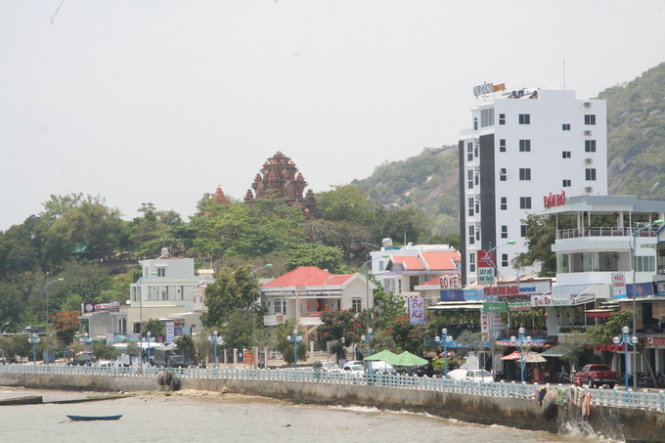 Views to and from a famous tower cluster in Nha Trang City in south-central Vietnam have been worryingly obstructed by the tall buildings in its vicinity, experts have warned.

The Ba Ponagar Tower Cluster, one of the country’s resplendent, almost intact Cham relics, is nestled atop a hill in Vinh Phuoc Ward in Nha Trang City.

The resort city is the capital of Khanh Hoa Province.

A nationally-recognized relic, the cluster boasts an imposing tower which stands almost 23 meters tall, and a few less prominent others.

The cluster is a major touristy draw with its intricate carvings, immense cultural significance, and overlapping bricks which mysteriously stick firmly without an adhesive.

The scenic spot has attracted influxes of domestic and international tourists and contributed markedly to the growth of the province’s tourism sector, according to the provincial People’s Committee.

Its annual festival, which features a wide array of Cham ethnic minority people’s cultural activities, has also been named a national intangible heritage.

The Ba Ponagar Tower Cluster is one of several such unique structures built by Cham people in ancient times in such provinces as Ninh Thuan, which neighbors Khanh Hoa, and Binh Dinh in the central region.

Similar towers are also a prominent highlight at the UNESCO-recognized My Son Sanctuary, located  in the central province of Quang Nam.

Nguyen Van Loc, chair of the provincial Architects Association, who joined a recent surveillance trip to the Ba Ponagar Tower, told Tuoi Tre (Youth) newspaper that views from the relic along Nha Trang Bay beaches which span from one end of the Tran Phu Bridge to the Hon Chong-Hon Do Islets waters are all seriously impeded.

“Similarly, the tower cluster has also turned ‘elusive’ and view-restricted to those standing on the beaches and in the parks within the above-mentioned areas,” he added.

In recent times, several hotels and houses have cropped up in the proximity to be “on a par” with the towers, Loc explained.

A multi-storey hotel is even built on the newly-opened Bo Ke Street, and looms large right in front of the towers.

He stressed that upon the completion of its construction, the 48-floor Muong Thanh Hotel and Apartment Complex, situated at a conspicuous position near the Tran Phu Bridge, will also rise between the towers and several of Nha Trang Bay beaches and obstruct the panoramas even further.

“Unless something is done soon to stop more tall buildings from emerging in the neighborhood, the Ba Ponagar Tower Cluster would be overshadowed entirely by such soulless structures,” Loc warned.

In a meeting last month, provincial leaders admitted to the worrying situation, which would pose quite a challenge for local authorities, according to Loc.    The People’s Committee has recently tasked the Department of Construction with working with competent agencies and coming up with measures to curb the height of new structures in the proximity of the towers.

As approved by the committee, the Khanh Hoa Architects Association is currently working on a 3D artist’s impression of the Ba Ponagar Tower Cluster and its neighboring area to facilitate their research on how to rectify the situation.