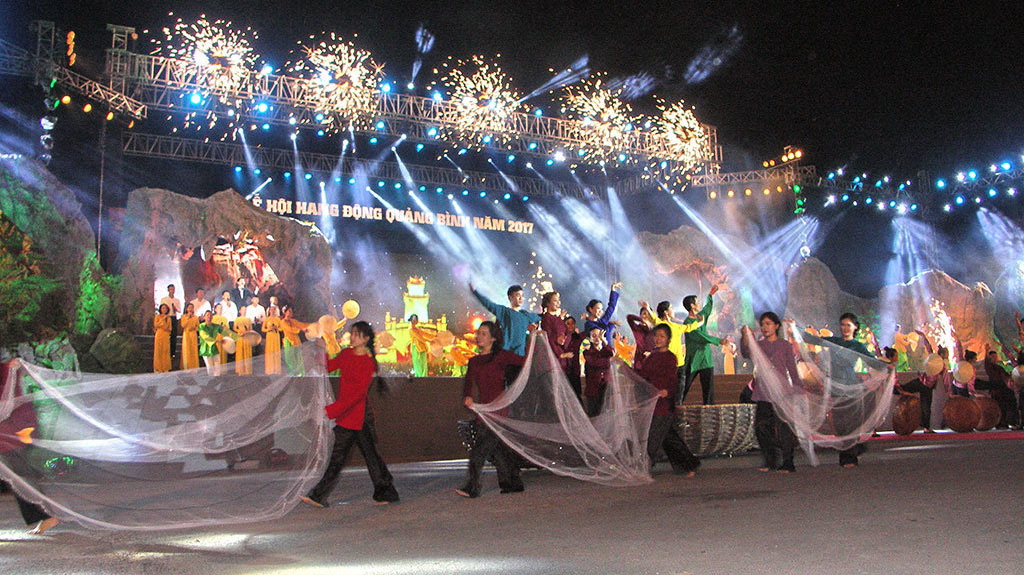 A system of over 300 natural caves in north-central Vietnam will be the focus of a week-long festival starting this weekend to promote local tourism.

Since 2009, the park has been recognized as a UNESCO World Heritage Site.

On Saturday evening, the opening ceremony of the ‘Quang Binh – The Kingdom of Caves – Magnificent and Legendary’ Festival was held in the provincial capital city of Dong Hoi.

Lasting from June 17 to 25, the festival is to showcase and promote Quang Binh’s unique tourism product that is its extensive system of over 300 naturally occurring limestone caves and grottoes.

Over 7,000 tourists and locals attended Saturday’s ceremony, which featured colorful art and music performances at the seaside square of Bao Ninh in Dong Hoi City.

The audience was treated to performances showcasing the mystifying beauty of Phong Nha and the local traditional Macoong drums, as well as a play re-enacting the life of late General Vo Nguyen Giap, one of Vietnam’s greatest military strategists born in Quang Binh.

Short documentaries featuring Son Doong Cave – the largest known cave passage cross-section in the world since 2009 – and other caves in Quang Binh were also screened to introduce the attractions to visitors.

During the course of the festival, tourists are offered a 10-20 percent discount on entrance fees to visit local attractions, hotel prices and catering services across the province.

A 20-30 percent discount is applied to entrance fees at popular caves like Phong Nha, Tien Son, and Thien Duong, according to Quang Binh’s administration.

Visitors to the province during the upcoming week will also have the chance to experience life as local sailors and fishermen by riding sailboats on the Nhat Le River or fishing for squids at sea.

A series of cultural exchange activities between Quang Binh and the northern city of Hai Phong are also included, where traditional forms of art such as water puppetry and folk singing will be performed to the public.