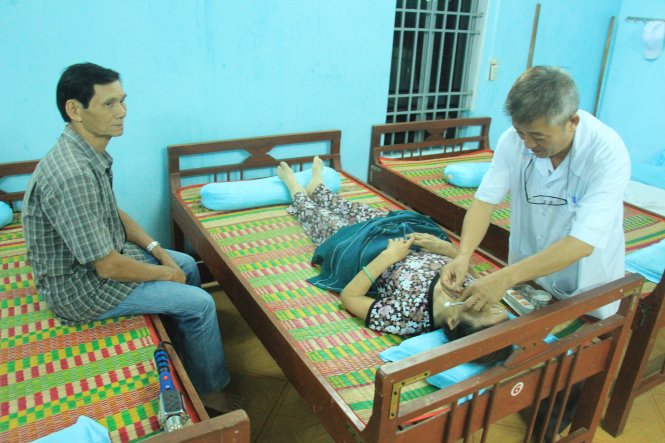 A home-based physician in central Vietnam has helped many poor patients at reduced costs or free of charge, and offered his own scholarships to financially underprivileged students.

Nguyen Khac Duong’s kindness is proverbial, since the 51-year-old provides gratis medical care to children under ten and treated patients at discounted rates between 30 and 100 percent depending on their poverty and severity of the illness.

Duong receives multiple visits from people with health problems daily at his small house in Tu Nghia District, Quang Ngai Province, which even has a room for inpatients.

He graduated from the Ho Chi Minh City Traditional Medicine School, which now belongs to a department of the University of Medicine and Pharmacy at Ho Chi Minh City – one of Vietnam’s most prestigious medical schools.

Over 2,000 square meters of his garden has been used for growing herbal plants, which he said enables him to sustain free treatment.

Working as a non-surgical practitioner for nearly two decades, Duong has examined patients with stroke, illnesses related to old age, and incurable diseases.

After this time span, stories of the doctor’s effort and generosity are many.

A local man named Do Hoang Vinh recalled that after a hospital completely abandoned its hope of saving his father, he took him to Duong.

The father survived for four more years thanks to the physician’s treatment, which was given free.

Duong was regarded as the last hope when Huynh Thi Kim Tan, a local woman, was taken to him after all other doctors failed to cure her schizophrenia and depression.

“He refused to take any penny from me. I begged him to receive treatment fees on many occasions, but he always declined the offers,” said Tan, whose mental health has improved.

“If patients can overcome their illness and lead a normal life again, that’s just enough to make me happy. I don’t expect anything other than that in my life,” Duong said, sharing his experience that belief and optimism help quicken recovery from disease.

The man said he does not need to be rich and keeps his life as simple as possible.

Instead of accumulating material wealth, he said, one should share what they have with others.

Nguyen Khac Duong has run an eponymous scholarship fund that he founded for poor local students over around ten years.

Although the initiative can hand only VND200,000 ($9) to each recipient, it seems to serve as a great motivation for students from disadvantaged family backgrounds here.

An event that triggered the fund decision came in 2008, when the daughter of a neighbor had to drop out of school because the father had had a traffic accident.

Duong willingly covered her tuition fees so that she could resume her education, before realizing that many other children in his area also fell into difficult situations.

The fund came into existence ever since.

Around a hundred students have been assisted in this fashion, one of whom is a middle-school orphan, who Duong said will continue to receive his financial help until she completes high school.

“I want the children to understand their difficulty so as to use that as a motivation for striving in life.”