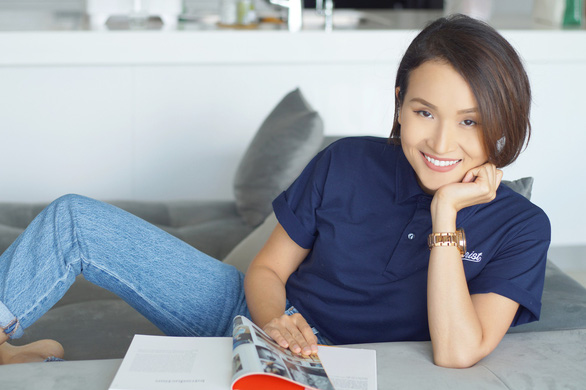 Unlike most YouTube personalities who only focus their videos on a single subject, Vietnamese vlogger Thu Giang shares a wide range of topics surrounding her life, including such important social matters as bullying.

Giang, owner of the YouTube channel Giang oi (Hey Giang), impresses her followers with the simplicity of her choice of content, as not many people can believe such topics as raising a cat, how to clean a house, or wardrobe rearranging can be turned into a video.

The 27-year-old explained that simple and trivial as they may sound, “these are the real problems most young adults face on daily basis.”

Giang has shared her daily life and struggles through videos as she learns how to lead an adult life.

Giang recorded her first video in 2015 with her friend’s camera.

The video was a simple amateur recording in which the main character was too shy to say anything so the only sound to fill the void was music in the background.

That first video was a great step towards an unexpected direction of the young female YouTuber.

Not many people would have thought that at first, making videos was just one of her hobbies.

According to Giang, it is increasingly important and enthusiastic to record memories through videos as people come and go, many of them one will never have a chance to see those past moments again.

However, thanks to the videos, one can relive their memories.

Having studied abroad, Giang never thought that her videos would receive such great support from Vietnamese audience.

The videos were intimate, in which Giang shared various aspects of her daily life as a way to give an update so her beloved ones will know about her whereabouts, intentions, and thoughts.

Today, with over 500,000 followers, the 27-year-old claims she is more than honored, and feels incredibly lucky for having a chance to connect people and put a smile on their faces through her videos.

Being an independent content creator posed countless challenges, especially for someone whose weakness is technology since it is apparent that making videos requires a good understanding of technological equipment, computers, and applications.

“I cannot keep track of the amount of times when I realized I forgot to turn on recording microphone, the camera ran out of battery, and my memory card got full, or when I lost all the recordings or had problems with video editing and had to redo it,” she said.

“Many times it was unavoidable situations, but in other cases it could be blamed on my carelessness,” the YouTuber admitted.

Even though Giang had to face many difficulties, rarely was she overwhelmed by them as she believes “when we like what we are doing, the challenges will not exhaust us.”

Hence, she always learned her lesson and carried on.

Inspired by being an independent woman

Leading an independent life can be challenging. With this in mind, Giang’s videos record herself growing up while she shares all the challenges, tips she came up with, as well as daily struggles many would consider ordinary.

There will always be audience who find themselves in her own experience, Giang said, adding that this is one of her main motivations.

However, small daily struggles are not the only content of Giang oi videos as she is also known for being straightforward when sharing unhappy memories in her life including isolation and bullying in her teenage years.

“When I had a considerable number of followers, I realized how much the audience trusts me,”  the YouTuber explained why she started making videos addressing more sensitive issues in the society.

Receiving messages from young audience telling her about their negative experience at school, including bullying and isolation, Giang remembered her own problems as a child which deeply affected her later on in life.

As a child, Giang was a victim of isolation with no one in school to play with or talk to.

Having no one to talk to both at home and at school, her life only consisted of school and home, nothing else.

“For a long time I have been asking myself what I have done wrong and why I did not deserve to have friends, before I realized there was nothing wrong with me,” she said.

“They are only trying to blame it on you so it is not your responsibility.”

Even though she did not intend the video to attract that much attention, she is happy it did.

“Everyone needs to understand that bullying at school is not ‘children’s stuff’ but a real problem that deserves attention,” Thu Giang said to Tuoi Tre.

When she was talking about her struggles in videos, Giang also sadly recalled that as adults we are strong and can deal with many different things while children are vulnerable and are more prone to being hurt both mentally and physically, indicating that even though isolation might not seem to be too serious of a problem, it actually deeply affects children.