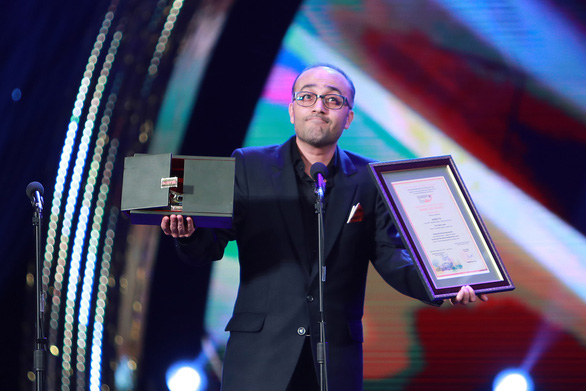 The 2018 Hanoi International Film Festival (HANIFF), themed “Cinema-Integration and Sustainable Development,” ended its five-day run with a wave of mixed emotions as participants reflected on both their joy and sadness upon leaving the closing ceremony at the Cultural Friendship Palace in the Vietnamese capital on Wednesday night.

The event, held from October 27 to 31, marked the fifth edition of Vietnam’s flagship film festival.

Event veterans were not shy about admitting that the biennial film festival, founded in 2010, still has a long way to go before it makes a name for itself in the international film scene but they were still proud of the progress it has made in establishing credibility in the Southeast Asian country while promoting local movies and art.

Several of this year’s entrants had even won recognition at prestigious international film awards and festivals such as the Oscars, Cannes, and Berlinale.

Director Nguyen Hoang Diep commented that “the greatest thing about the 2018 HANIFF is its ability to attract hits such as Shoplifter, Ida, A Fantastic Woman to Vietnam.”

Unlike previous editions where some feature films that do not meet the quality standards still appeared at HANIFF, this year’s event included two selection rounds to pick out 147 films of acceptable quality from 45 countries and territories to screen in Hanoi.

Many attendees at the event agreed that although the 2018 HANIFF lacked outstanding entries capable of overwhelming viewers, it introduced many good films with depth, humane meaning, and complex production techniques.

Most of the films screened at the event address family and family-related issues, with Silent Night from Poland, The Dark Room from Iran, and The Signal Rock from the Philippines widely considered as the festival’s standouts.

Director Nhue Giang told Tuoi Tre (Youth) newspaper that “when I watched the films from Iran, China, Poland, and Afghanistan at HANIFF, I admired their producers' bravery to depict tough issues in society.”

While Giang applauded many of the international entries, he shared his regrets that Vietnamese films at the festival were entertaining but lacked the same depth and reflection on local society that the international films had.

According to the National Cinema Center, ‘made-in-Vietnam’ films won the audience’s hearts.

Thanks to local promotions sponsored by HANIFF in the lead-up to the festival, the Vietnamese movies attracted higher audience numbers than their foreign counterparts.

The National Cinema Center also noted that audiences did not seem particularly keen on foreign films, including the Oscars, Cannes, and Berlinale winners, probably due to poor PR planning by HANIFF’s organizers.

“I felt disappointed that the audiences were so small at so many of the showings,” said Diep, adding that “HANIFF’s media and communications plan was not really effective,” the director criticized.

In addition, the drawbacks of the event included the hosts' insufficient English and errors in subtitles.

But the most concerning incidents involved a complaint from an Iranian director who said that a HANIFF catalog included misleading information about his country.

Particularly, the catalog claimed that Iran is a small country when it is actually the second largest country in the Middle East and the home of Persian storybooks, instead of the Arabic folk tales One Thousand and One Nights.

Despite its weaknesses, director Diep still believes that HANIFF will continue to improve itself in the future.

Diep told Tuoi Tre after joining a seminar on Iranian cinema achievements within the framework of the festival on Monday that “if what were discussed at the workshop are really implemented, the sixth HANIFF will be very different.”

After five days, the 2018 HANIFF held its closing ceremony where several prizes were awarded to outstanding films and actors in various categories.

Accordingly, The Dark Room from Iran won the Best Feature Film, the Philippines’ The Signal Rock brought home the Best Actor award, and the Best Director went to the director of Silent Night from Poland.