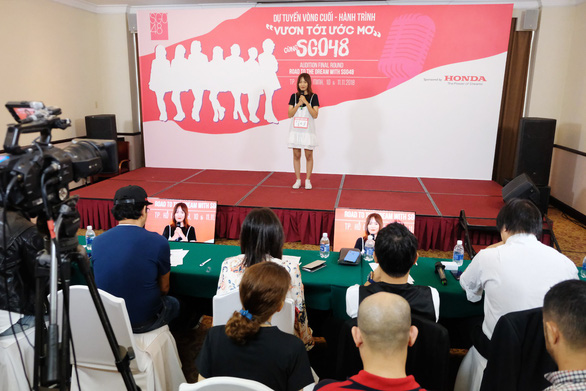 AKB48, Japan’s biggest idol girl group, is scheduled to perform in Hanoi with their Vietnamese sister girl band this weekend as part of a cultural exchange event between Vietnam and Japan.

The renowned Japanese girl group will take part in the Vietnam - Japan Cultural Exchange Day in the Vietnamese capital on Sunday, November 18.

They will be accompanied by their Vietnamese sister group, SGO48.

The audition for 48 members of the SGO48 came to an end last weekend following a two-month journey.

About 8,000 contestants aged 13 and over submitted their application online, of whom only 350 were selected.

The top 120 were then revealed to show off their talent in the final audition round in Ho Chi Minh City on Saturday and Sunday last week.

Each candidate was asked to sing a song within one minute before answering questions from a board of Vietnamese and Japanese judges.

As most of the contestants are fans of AKB48 and Japanese pop music in general, they were able to perform Japanese songs.

Many of the younger girls also amazed the judges with their fluent Japanese speaking skills.

Some shared they are self-taught thanks to their passion for Japanese music from an early age.

The 48 members have already been decided and their names will be announced in the coming days.

According to Takeshi Kise, AKB48’s choreographer and mentor of SGO48, members of the original girl group have high hope for their Vietnamese sisters and are very excited to be performing along them in front of local fans.

Established in December 2005, AKB48 is named after the Akihabara (Akiba for short) area in Tokyo, where the group's theater is located.

The group had sold over 56 million records, including over six million albums, by June 2018.

The beauty of Vietnam captured from above

These photos offer a new perspective on Vietnam’s iconic landscapes