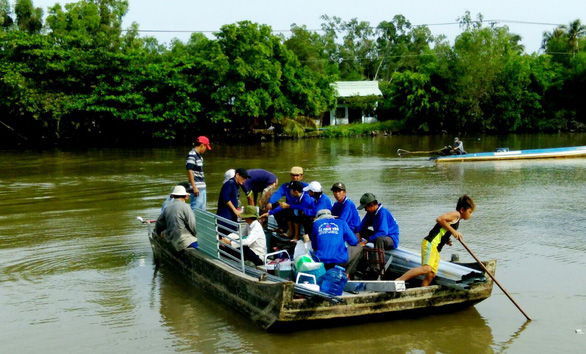 Many laborers in Vietnam’s Mekong Delta have voluntarily built houses for poor residents although they themselves also come from disadvantaged family backgrounds.

The laborers, forming a community-welfare group three years ago, have put up nearly 400 houses for poverty-stricken families across their hometown in Dong Thap Province’s rural district of Lap Vo and other areas in the Mekong Delta.

The 52-member group’s logistic unit carries construction materials on rented vehicles to the destination well in advance of the day a house is erected.

“Last year we made 32 houses outside Dong Thap, and now we’ve built houses in 13 provinces in the Mekong Delta,” said Huynh Phu Quan, one of the group’s leaders.

“We try to give help wherever there are poor people and ramshackle houses.”

The group’s inception has elements of empathy with those weighed on by worries about shelters.

Quan said he used to live in a house that gave his family great fears about their safety as it stood to collapse in storms.

He realized that many people who are much poorer than him also suffered from a similar situation.

He then decided to gather local men into a group to offer to create better houses.

“We initially thought we could only build just a few houses a year, but to our surprise, we’ve made nearly 150 ones every year so far,” Quan said.

“A house we build is a happy feeling we get.”

Initially, Quan and other members only provided wooden buildings but as the structures were easily damaged just after several years, they turned to stronger materials such as concrete.

The members receive contributions from different benefactors and make the donation use transparent before putting up houses that cost VND20 million ($860) each.

It is the transparency that earns trust from the participants and explains the sustainability of the group, Quan said.

Many of the group members struggle for livelihood but the difficulty does not detract from their charitable efforts.

Hai has been enthusiastic with joining hands with the other members in building houses and never asked for a new building in place of his own dilapidated one.

“There are many people poorer than me in society. I try to help as many people in trouble as possible,” Hai said.

“What is so much calculation in the kind act for?”

Hoang Minh, another member who earned the nickname ‘whatever worker’ due to his willingness to do whatever he can in the community, has been always with the group since it was established.

“We become less tired when seeing others happy,” Minh said.

When working away from their hometown in Dong Thap, the group stays in a tent where they can sleep and eat instant noodles at meal time.

The group leader Quan said the members’ public-spiritedness was sometimes surrounded by ill words saying that they care about matters unrelated to them while they are still poor.

But this does not reduce their commitment, Quan said, adding that all the participants now have insurances against construction accidents.