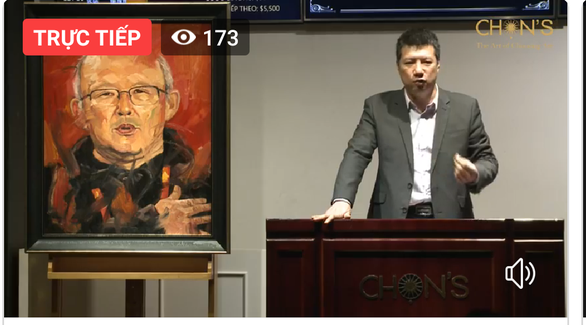 A hand-painted portrait of South Korean coach Park Hang-seo, who led Vietnam to the top of Southeast Asian football by clinching the trophy at the 2018 AFF Championship earlier this month, was sold for US$10,500 at an auction in Hanoi on Sunday.

The oil painting, named Nguoi thay cua toi (My mentor), is a work by Vietnamese artist Tran The Vinh.

It depicts Park on a red background with one hand on his heart, apparently singing to the national anthem of Vietnam during a match.

Vu Quang Huy, a popular TV host and sports commentator in Vietnam, was invited to be the honorary auctioneer for the special event.

The artwork was sold to the highest bidder for $10,500, half of which was immediately donated to a local charity fund at the auction.

The remaining half of the money would be used to sponsor a foundation that provides financial support to young and rising artists in Vietnam, according to Nguyen Xuan Cuong, director of the Chon auction house which organized the event.

From a relatively unknown football coach when he first took charge as manager of Vietnam’s national football team in October 2017, Park has demonstrated a convincing performance throughout three major international tournaments in 2018.

In January, he led Vietnam’s under-23 team to the second place at the AFC U23 Championship in China, defeating the likes of Australia, Iraq and Qatar and succumbing only to Uzbekistan by a 119th-minute goal in the final game.

At the 2018 Asian Games in Indonesia in August, Park led Vietnam to the semi-finals of men’s football, where they were defeated by an unstoppable South Korean side that eventually won the gold medal.

When Vietnam finally lifted the 2018 AFF Championship trophy in December, the country’s first in a decade, it was with little doubt that coach Park hang-seo would go down as one of the greatest coaches to have ever managed the Vietnamese national football team.