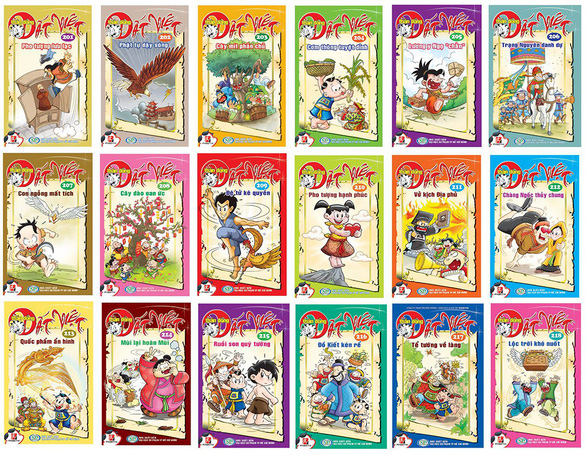 A Ho Chi Minh City court on Monday made a landmark decision to award an artist intellectual property rights over four fictional characters in an iconic series of Vietnamese children’s comics, putting an end to a high-profile lawsuit that had dragged on for 12 years.

The lawsuit revolves around creator rights over four main characters in the ‘Than Dong Dat Viet’ (Prodigy of the Viet Land) series that has captivated generations of Vietnamese children.

First published in 2002, the iconic comics are set in rural Vietnam during the Later Le dynasty and chronicle the life of a group of childhood friends who find clever ways to overcome challenging tasks and puzzles.

The stories are inspired by local folk tales and historical records of real Vietnamese figures.

It is considered the longest-running comic series in Vietnam, having published 226 volumes and counting as of the time of writing.

Of these, nearly 150 volumes were published amid a copyright row regarding the main characters of the series between a local artist and the head of the publishing unit of the comics.

It all started in April 2007, when artist Le Linh filed a lawsuit against Phan Thi, a company that collaborated with him on producing ‘Than Dong Dat Viet,’ demanding that he be recognized as the sole creator of the comics’ characters.

The lawsuit was brought after Phan Thi had submitted a copyright registration which indicates that Le Linh is only one of the characters’ co-creators alongside the company’s director, Phan Thi My Hanh.

Hanh claimed she had already visualized and conceptualized the characters in her head and only collaborated with Le Linh to flesh out her ideas.

Linh also accused Phan Thi of violating his intellectual property rights by hiring other artists to draw the characters and continuing to produce new volumes of the comics after he had withdrawn from the project following the 78th volume, published in 2005.

The lawsuit had dragged on for 12 years due to a lack of supporting documents until a court in District 1, Ho Chi Minh City finally opened on December 28, 2018.

The court reached a verdict on the case on Monday, recognizing Le Linh as the sole creator of the comics’ characters and rejecting Phan Thi My Hanh as their co-creator.

Phan Thi violated Linh’s rights by drawing and modifying the characters without his agreement after the artist had got out of the project, the court ruled.

The company is required to stop producing new works based on the characters created by Le Linh, pay for the artist’s attorney’s fee related to the lawsuit, and run an official apology in printed newspapers, according to the verdict.

A representative of the defendant said after the court that they would appeal the judgment.