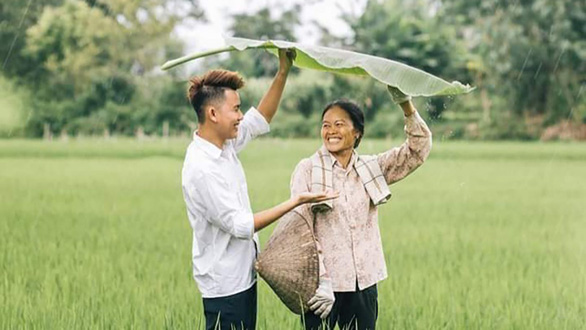 A young Vietnamese has kept a vlog about his mother and the dishes she cooks herself, as a tribute to her devotion to him all her life.

Dong Van Hung, 23, thought he would cherish the videos he had shot of his mom and her daily routines simply as his own memories of the woman he loves the most.

But he has switched to a full vlog about her ever since he randomly posted some videos on social media, as his friends have given so much positive feedback on them.

So Hung has convinced his mother to join him in the vlog and she has accompanied him on the vlogging journey.

He left for Hanoi to land a job at a company after graduation from high school, for his family could not afford his higher education.

After one year, he changed to photography to make a living.

Hung frequently visited his mother after his grandmother passed away, hoping to help comfort her mom to some extent.

He saw his mother toil in the fields, do the gardening, and cook dishes every day so he wanted to keep these routines as memories.

“At first I didn’t mean to keep a vlog, I merely intended to treasure the videos of my mom as my own memories,” Hung said.

“I then posted some of the videos on social media and received so many positive comments.

“My mother and I therefore paid more attention to detail and quality when we shot the videos and uploaded them to Facebook and YouTube.”

His mom, Duong Thi Cuong is 55 years old. She takes great delight in cleaning the house, feeding the chickens, and sitting by Map the dog.

She particularly relishes cooking rural dishes, such as countryside crab meat soup served with vegetables, rice with smashed peanuts and salt, and banh duc – a cake made from either non-glutinous rice flour or corn flour.

All of the dishes have been captured on video by her son Hung.

“I want to tell a story about my mom’s diligence and hardship, the ordinary meals she prepares, and my hometown,” the young man said.

“My mom would probably feel lonely if I worked far from home.

“Shooting such videos with my mom would earn me a good income [from ads on YouTube] while keeping me beside her.”

Hung posts one video of the dishes his mother cooks a week.

His YouTube channel, Am Thuc Me Lam (literally Dishes Mom Cooks), has garnered about 170,000 subscribers, most of whom apprecate the image of a hardworking and dedicated mother of the northern part of the country.

Cuong felt a little shy recounting the early days of her ‘working’ as the main ‘actress’ in the videos.

“I was so timid in the first place but Hung kept encouraging me to try so we could make a living from [ads in] the videos later on,” she said.

“They’re just the chores I do daily like cooking, farming, gardening, cattle raising, no big deal.

“But videoing takes time and requires meticulousness and carefulness so there were times when I lost my patience and was mad at him.

“More often than not, we have very late dinner.”

However, nothing can prevent her from enjoying the work with, and being near, her son. When Hung worked in Hanoi, he visited her just once in a blue moon.

Now he is with her far more often, which enables her to relish peace of mind.

For Hung, he finds inspiration from the smiles on his mom’s face.

He is giving the videos his all, in hopes that they would be able to monetize them one day.

Hung also plans to add videos of the landscapes in his hometown to the YouTube channel.