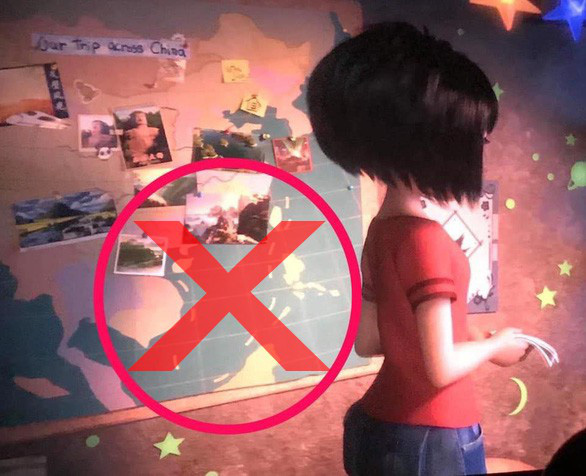 DreamWorks’ latest animated feature film ‘Abominable’ has been removed from theaters in Vietnam after viewers noticed the ‘nine-dash line’ - used by China to support their illegal claims to the East Vietnam Sea - depicted on a map seen in the background of one scene.

‘Abominable,’ known in Vietnam as ‘Everest Nguoi Tuyet Be Nho’ (Everest the Petite Yeti), was first shown in Vietnamese cinemas on October 4.

The film follows teenager Yi as she encounters a young Yeti, a mythical ape-like creature, on the roof of her apartment building in Shanghai and embarks on an epic quest to reunite the new friend, whom she names ‘Everest,’ with his family.

It was a joint production between American animation studio DreamWorks and China’s Pearl Studio.

Vietnamese viewers have reported seeing a world map in the background of one scene depicting what appears to be the so-called ‘nine-dash line.’

The U-shaped line is an arbitrary demarcation line used on Chinese maps to illustrate Beijing’s illegal and unilaterally declared claims to vast expanses of the East Vietnam Sea, including large swathes of Vietnam’s Continental Shelf.

The film was removed from cinemas in Vietnam on Sunday after images of the scene with the absurd map were shared widely on social media.

Nguyen Hoang Hai, director of distribution for CJ CGV Vietnam, which is the largest cinema chain in the country and a unit of South Korea’s CJ CGV, told Tuoi Tre (Youth) newspaper the removal of all ‘Abominable’ screenings was due to “lack of audiences.”

CJ CGV is the official distributor for ‘Abominable’ in Vietnam.

A receptionist at the state-run National Cinema Center in Hanoi told Reuters the culture ministry had issued an order requiring all Vietnamese cinemas to stop showing the film because of the map scene.

In March 2018, Chinese action film ‘Operation Red Sea’ was also withdrawn from Vietnamese theaters over a scene implying that the East Vietnam Sea belongs to China.

The two-minute scene unfolded at sea, where a fleet of Chinese battleships surrounded an unknown ship and repeatedly demanded that the vessel get out of their so-called ‘South China Sea.’

An 11-member council is responsible for evaluating films before licensing them for screening in Vietnam.

Each council member reportedly has to sit through two movies each day, minutely scanning for inappropriate content, a former member told Tuoi Tre.

The council sifts through, on average, 200 foreign films and 40 Vietnamese ones every year to see if they are fit for the Vietnamese audience.