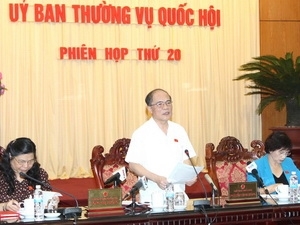 After a week-long sitting, the National Assembly Standing Committee concluded its 20th session in Hanoi on Wednesday after considering many bills and amendments. During the session, lawmakers raised their opinions on the draft amendments to the 1992 Constitution. They also discussed seven draft laws, an ordinance on mobile police, and decrees on casino and betting business on horse, dog racing and international football.

At the meeting, deputies discussed the Government’s report on assessing the implementation of the State Treasury’s financial management mechanism and payroll in the 2009-2013 period.

They also gave comments on the Resolution on amendments and supplements to some articles of the Resolution No. 928/2010/UBTBQH10 on tax rates imposed on natural resources.

Speaking at the meeting, NA Chairman Nguyen Sinh Hung requested that the NA Standing Committee, Council for Ethnic Affairs and other agencies refine documents in preparation for the next sessions of the committee in September and October and the sixth session of the NA, where the draft revised 1992 Constitution, the draft Law on Land and other important contents will be considered for approval.