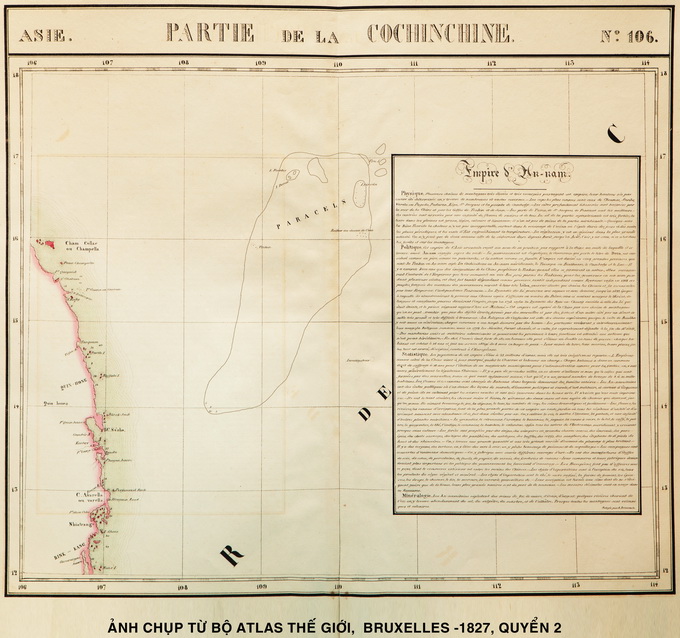 The Ministry of Information and Communications held a ceremony on Tuesday to receive and announce the “Atlas Universel de Geographie” (World Atlas of Geography) by a French geographer published back in 1827, which proves Vietnam’s sovereignty over its Hoang Sa (Paracel) and Truong Sa (Spratly) archipelagos.

>> Vietnamese ship hits back at 15 Chinese vessels with water cannon

Hoang Sa is also described precisely from Latitudes 16 to 17 and from Meridians 109 to 111.

In the map, the Hoang Sa archipelago is comprised of such islands as Pattles and DunCan to the west, Tree and Lincoln and Rocher au desus de l’eau to the east, Triton to the southwest, and Invertigateur to the south.

Apart from the Hoang Sa archipelago, the map also features a summary on the “Empire d’An-nam” (Empire of An Nam).

The “Partie de la Cochinchine” is the first international map to precisely feature the coordinates, geographical characteristics, and Western names of the Hoang Sa archipelago’s key and largest islands.

The map is strongly indicative of Vietnam’s sovereignty over the archipelago.

The Atlas was created based on the world’s best maps back then, astrological observations, and findings obtained during journeys around the globe.

Philippe Vandermaelen was an eminent Flemish cartographer and geographer.

He was believed to be one of the founding members of the School of Geography at Molenbeek Brussels, now known as the Military Geographical Institute, Brussels.

Vandermaelen involved himself in creating and publishing maps and extensively used the metric system to determine the scales on his maps, resulting in high-level scientific accuracy.

His Map of Belgium, which was published in 1866 and is still used as a guide, is an outstanding example of such accuracy.

Vandermaelen’s “Atlas Universel de Geographie” was spotted by a Vietnamese graduate student in France at a Sanderus bookstore, which sells time-honored books in Gent City in Belgium.

Ngo Chi Dung, CEO of ECO Pharma Co., sponsored all research on the Atlas in national libraries in France and Belgium, as well as extensive discussions with French and Belgian experts to verify that the Atlas is the original that was published in Brussels back in 1827.

Upon the origin verification, the Atlas was purchased and brought to Vietnam to cement the historical and legal evidence of Vietnam’s sovereignty over the Hoang Sa archipelago.

The receipt and announcement of the Atlas is part of the country’s activities to boost the collection and use of materials and maps related to Vietnam’s sovereignty over Hoang Sa and Truong Sa.

Starting in the 16th century, several Western maps featured the Indies or East Indies (or East India), which include the lands of South and Southeast Asia, including Vietnam, as having Hoang Sa in the East Vietnam Sea, and marking the coastline to the west of Hoang Sa (the central Vietnamese coast) as Costa de Paracels (Coast of Paracels).

During the 17th and especially 18th centuries, more maps clearly indicated the position, geographical features, and relationship of Hoang Sa to “Dang Trong” (Inner Half – an area of Vietnamese southward expansion in the past).

However, most of these maps still included Hoang Sa in the Indies or East Indies.

All Chinese maps from the early 20th century are also coherent with their Western counterparts in that they never feature China’s southernmost frontier crossing beneath Latitude 18.

In the past several days, Vietnamese people at home and abroad have been expressing solidarity in protesting against the illegal deployment of a giant oil rig by China in Vietnamese waters in the East Vietnam Sea early this month.