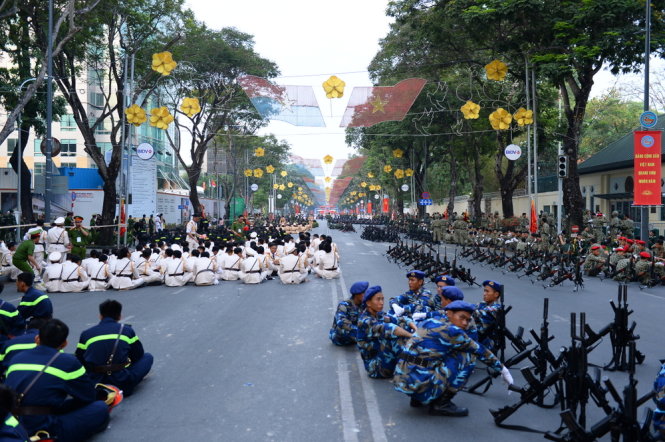 Nearly 6,000 soldiers, militiamen, and civilians partook in the Sunday rehearsal of a military parade and other ceremonies, to take place in downtown Ho Chi Minh City in commemoration of the 40th anniversary of Reunification Day on April 30.

The two-hour rehearsal began at 7:00 am on Sunday in the downtown area under tremendously strict security.

Some 1,000 others from the security force, backstage personnel, and media were also present at the event.

Later came a group of children and teenagers and another van with the photo of the country’s late President Ho Chi Minh. The drilled parade began at the Le Duan-Nguyen Binh Khiem intersection and proceeded to the District 1 People’s Committee office.

They gradually marched past the stage into the front area of the Reunification Palace.

The official parade is set to take place at 7:00 am on Thursday, April 30.

Following the parade and march, a music show will be organized with the performance of over 4,400 artists.

Vietnam was reunified on that date when the U.S.-backed Saigon regime fell.