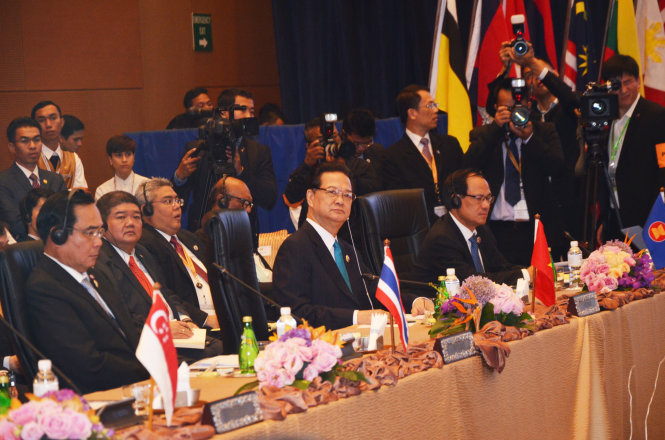 One of the most serious security challenges in Southeast Asia is the complicated situation in the East Vietnam Sea, the Vietnamese prime minister said in a meeting at the 27th ASEAN Summit in Kuala Lumpur, Malaysia on Saturday.

The large-scale reclamation and construction of islands, rocks and other unilateral activities in the East Vietnam Sea are causing serious consequences – including tension and erosion of confidence – amid deep concern from the international community, PM Dung said during the summit.

Those activities and their aftermath could lead to the risk of militarization and conflict at sea, threatening peace and stability in the region, the premier added.

China has unlawfully claimed almost the entire East Vietnam Sea and sped up its construction and reclamation, including the building of artificial islands and lighthouses, despite protests and concern from other claimants and countries.

Vietnam, the Philippines, Brunei, Taiwan, and Malaysia all claim sovereignty over the sea, considered a very important shipping lane through which US$5 trillion in world trade transits every year.

The situation will require solidarity and unity within ASEAN for the implementation of counter strategies, including voicing concern about the complicated and unilateral actions taking place, their negative and dangerous implications, the Vietnamese premier said.

All countries should promote compliance with rules and regulations, especially the principle of settling disputes by peaceful means on the basis of international law, especially the 1982 UN Convention on the Law of the Sea, avoid using or threatening to use force and apply self-restraint in not complicating the situation further, PM Dung said.

They should also build trust, reduce tension, and prevent conflict through the mechanisms of ASEAN, he asserted.

"Following this direction, Vietnam suggests ASEAN as a whole, together with China, commit themselves to not pursuing or taking any militarized action in the East Vietnam Sea,” PM Dung said.

“By substantively exchanging between all parties involved, we should forge ahead for the establishment of a Code of Conduct for the sea,” he added.

According to the Vietnam News Agency, the complicated developments in the East Vietnam Sea have caused deep concern from other ASEAN leaders present, who stressed the need to employ peaceful measures to handle disputes in accordance with international law and the 1982 UN Convention on the Law of the Sea.

The leaders all agreed to fully legitimize ASEAN’s role in settling all disputes.