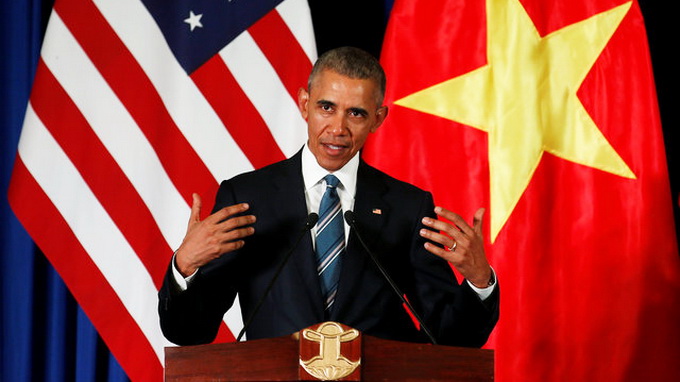 When it comes to public attention, it would be hard to find any other world leader that can fascinate Vietnamese people with how he travels, what he eats, or where he stays as much as Obama has done so far.

As U.S. President Barack Obama makes his first trip to Vietnam, which began late Sunday, local media have been in a frenzy to put every detail of the president’s trip under scrutiny.

Air Force One, Marine One, and The Beast, the three transportation vehicles used by President Obama during his visit to Vietnam have been closely inspected by the media, as major newspapers have carried detailed descriptions of the vehicles’ security features.

Articles about where the president will be staying and what he will eat on his three-day visit, as well as security preparations in those places, have also been continually published by the Vietnamese press.

Since Obama landed at Noi Bai International Airport in Hanoi on Sunday evening, coverage in local dailies has been dedicated mostly to the U.S. president’s visit, even diverting attention away from the nationwide election for the country’s lawmaking National Assembly that took place on Sunday.

Headlines about the president’s activities flooded the homepage of many online newspapers on Monday, as Obama commenced his official working agenda, including the online version of Vietnam’s largest daily Tuoi Tre (Youth).

After the end of the American war in Vietnam in 1975, the foes-turned-friends are now observing “complete normalization of bilateral relations,” as Vietnamese State President Tran Dai Quang said on the full lifting of a U.S. embargo on lethal weapon sales to Vietnam promised by President Obama during the visit.

The sight of Vietnamese people crowding street sides to look on as Obama’s motorcade passes by perhaps serves as concrete evidence that the Vietnamese are now looking at a U.S. president not as the head of a rival nation, but as a bridge of cooperation.

President Obama will continue his stay in Vietnam until Wednesday afternoon, during which time he will visit senior Vietnamese leaders, talk with businesses in Ho Chi Minh City, and speak in front of Young Southeast Asian Leaders Initiative (YSEALI) representatives.

The president will leave for a G7 summit in Japan on Wednesday afternoon.