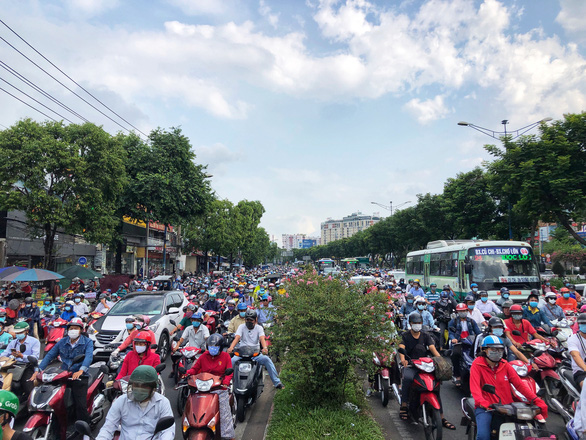 Editor's note:This story is written by Ray Kuschert, an Australian who has lived in Ho Chi Minh City and experienced daily traffic in the city for more than eight years.

The first thing every visitor says as they arrive in Ho Chi Minh City is, 'OMG!! Look at those bikes!!” As the third largest consumer of motorcycles in the world, Vietnam thrives on the two-seater scooters for daily transport. In fact, around 50 percent of the population are said to own a bike. However, getting around town is actually much better than the critics would have you think.

With less than 10 percent of commutes being by car, motorbikes have been a symbol of life in Ho Chi Minh City, formerly Saigon, for decades. In fact, local streets are often built just to accommodate motorcycles and many homes have a space in the living area to keep a motorbike safe at home.

From the outside, it can appear that Ho Chi Minh City is a gridlock of two-wheeled vehicles, however, logical designing and cultural respect have created one of the better traffic systems in the world.

Cars in major cities all over the world create massive congestion. In cities like New York and Sydney, commute times for private vehicles now far exceed one hour each way, but in Ho Chi Minh City, the average commute time of around 56 percent of the working population that use motorbikes is less than 40 minutes, with others walking, using bicycles, cars and public transport.

There are a few strategic reasons why this occurs. Firstly, this society does not have massive class differences across the city. This means that a worker can live in budget accommodation in an area that is within the reach of their work. Additionally, for the lower wage earners such as factory staff, accommodation and assistance are often given to allow workers to live within the walking distance of their factory.

For those that commute, there is a strange cultural process not seen anywhere else in the world. There is a culture of continuance of movement. Traffic occurs, and with the motorbikes it is like a colony of ants moving through the city, but there is this culture of movement that keeps traffic going.

Where a traffic jam occurs, riders will use footpaths or any spare space to get out of the traffic. Likewise, red lights are sometimes considered as not so important with police being flexible to disregard the lights to move traffic on when congestion happens. The whole foundation of movement is different from any Western city so you rarely find yourself sitting still for too long.

Sitting over this is the sense of community. It is a daily experience to be sitting in traffic and to find yourself talking to someone about something totally irrelevant. Whether it is a kid wanting to practice English, or just a person wanting to be friendly, the streets of Ho Chi Minh City are a melting pot of people getting to their destination and those who actually have a moment to acknowledge you.

As a comparison, my commute time in Sydney, Australia ranged from one hour to an hour 45 minutes each way per day. Here in Vietnam, my maximum commute is 45 minutes in traffic each way. The swarm of motorbikes is an illusion. Smaller and more mobile vehicles mean that the drivers have more options to maintain movement in their commute. Red lights are considered more a suggestion than rule and police maintain a very different view of the traffic compared to Western countries.

Even building design lends itself to better operations. Because everyone drives a bike to work, you can fit around six motorbikes in the same space you can fit one car. This means your business can plan for around 60 percent to 70 percent less space for staff parking. This is a massive saving for global companies choosing Ho Chi Minh City as an offshore operation location.

Don’t fear the swarm of traffic because it has purpose and function. In the modern world of Ho Chi Minh City, the average commute is under 10km and we will see the city evolve with electric modes of personal transport becoming more popular every day. Also, businesses will be able to accommodate this changing technological world with more ease than car-based communities. Ho Chi Minh City is quickly becoming a choice location for global businesses having skilled workers, with good English, unique infrastructure that is growing to meet the future world and a growing economy that is devoid of the stresses present in many Western countries. It really is the jewel of the east for companies and visitors alike.

Make sure you take the time to visit Ho Chi Minh City and experience how good ‘different’ can really be. It’s the city where timeless charm meets the future world. See you soon in Saigon.

‘Streets of Innovation’ envisions Ho Chi Minh City as a convergence hub for social impact businesses, rallying international friends, and the city’s residents, all under a single mission: expand social impact in Vietnam and the region