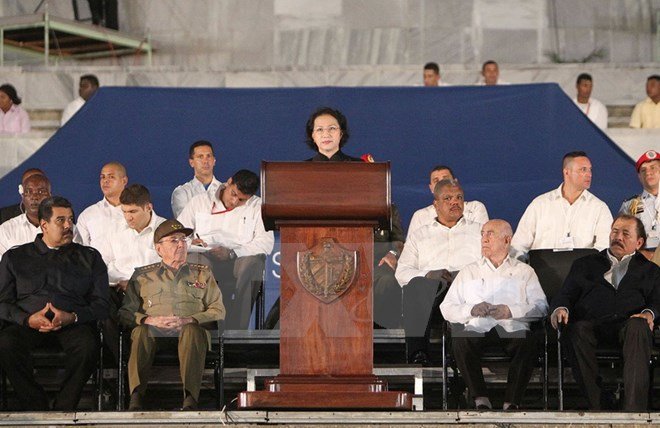 Chairwoman of Vietnam’s National Assembly Nguyen Thi Kim Ngan delivered a speech at the memorial ceremony for Cuban revolutionary leader Fidel Castro on Tuesday, according to the Vietnam News Agency.

The Vietnamese chair spoke at the ceremony in memory of the late Cuban leader in Havana on Tuesday night (Cuba time) during her trip to the Caribbean nation scheduled for November 28 to 30.

Fidel Castro took power after the 1959 Cuban Revolution and led the country for 49 years before passing away at the age of 90 on November 25.

The revolutionary icon was a pioneer in the international movement to support Vietnam’s struggle for independence and reunification, along with its national reconstruction and development efforts.

Vietnam is slated to hold a national day of mourning for the Cuban revolutionary on December 4.

The commemoration was attended by Cuban Party and State leaders, about 60 delegations of foreign leaders, representatives from international and regional organizations, and over one million Cuban people.

During her speech, Chairwoman Ngan reiterated the role of Fidel Castro in the world's revolutionary movement before highlighting the historical friendship and solidarity between Cuba and Vietnam.

The Vietnamese people will always remember Fidel Castro’s famous words, “For Vietnam, Cuba is willing to devote blood,” and his memory will live forever in Cuba’s revolutionary cause and in the hearts of all nations across the world, she added.

During their conversation, Ngan extended her deepest condolences for Cuba’s loss, on behalf of the Vietnamese Party, State, and people.

According to the chief legislator, Vietnam will hold a special ceremony in tribute to the Cuban revolutionary leader who spent much of his life as a close comrade and brother of Vietnamese leaders and people.

Cuba’s NA Chairman Hernández stated that the Vietnamese delegation, led by Ngan, was the first foreign delegation to arrive in Cuba and pay tribute to Fidel Castro on November 28, reflecting the special relationship between the two countries’ leaders and people.

The two parties reached consensus on certain measures to improve the efficiency of legislative cooperation between them.