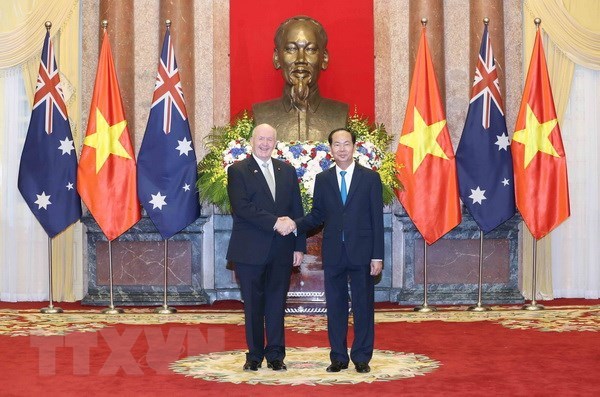 Vietnam and Australia will boost multi-faceted cooperation to make their bilateral relationship on a par with their strategic partnership, Vietnamese State President Tran Dai Quang and Australian Governor-General Peter Cosgrove agreed during a meeting in Hanoi.

Governor-General Cosgrove joined talks with President Quang in the Vietnamese capital on Thursday morning as part of his state visit to the Southeast Asian country from May 23 to 26.

The Vietnamese head of state shared that the visit is particularly noteworthy considering just weeks earlier the two nations elevated their relationship to a strategic partnership in March in celebration of the 45th anniversary of their diplomatic ties.

The leaders expressed their satisfaction with the outcomes so far achieved by the two countries’ economic collaboration.

Two-way trade between Vietnam and Australia hit nearly US$6.5 billion in 2017. Australia has poured $1.8 billion into 400 projects in Vietnam, ranking 19th out of the 129 countries and territories currently investing in the nation.

In order to keep their relationship on a par with the strategic partnership, both parties agreed to work in tandem to consolidate political and strategic trust through regular exchanges at all leadership levels.

Vietnam and Australia should also deepen their ties in national defense and security, education and training, science and technology, culture, sports, tourism, and labor, the leaders consented.

Both sides also shared that they plan to reconsider current trade barriers affecting exports to either country.

They plan to devise policies encouraging and supporting businesses to invest in each market, thus creating breakthroughs in bilateral trade and investment ties.

During the meeting, Governor-General Cosgrove expressed his joy at the increase of visitors from both nations.

In 2017, nearly 400,000 Australians visited Vietnam and more than 200 Vietnamese citizens registered to work in Australia under the Work and Holiday Program.

There are currently 30,000 Vietnamese students studying in Australia and nearly 1,000 Australian students have come to Vietnam under the New Colombo Plan.

These are important factors contributing to boosting the friendship and cooperation between the two countries, President Quang said.

On May 27, the Cao Lanh Bridge worth $160 million, which is funded by the Australian government, will be open to traffic.

Governor-General Cosgrove called the bridge’s construction a symbol of the Australian government’s support for infrastructure development and improvement of living standards for residents in Vietnam’s Mekong Delta.