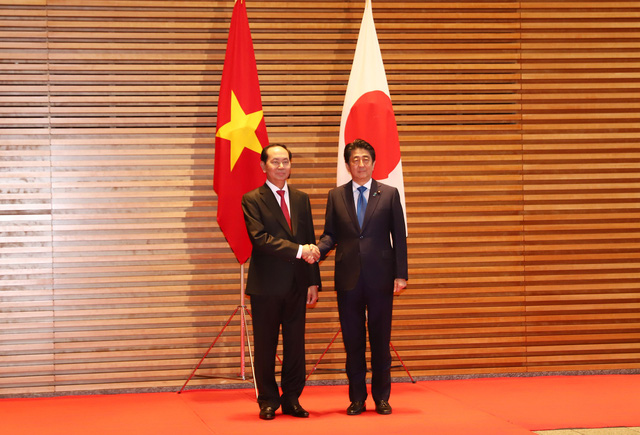 The two leaders joined talks in Tokyo on Thursday afternoon as part of President Quang’s ongoing state visit to Japan from May 29 to June 2.

During the conversation, both sides agreed that 2018 is an important year as it opens a new phase of development in bilateral relationship, matching the benefits of both nations.

Japan will increase investment in Vietnam, create favorable conditions for Vietnamese agricultural products to be sold in the local market, and strengthen cooperation in major projects in infrastructure, human resources, and climate change response.

The two countries will coordinate closely in the effective use of Japanese ODA (official development assistance) in Vietnam.

They will take certain measures to boost collaboration in agriculture, healthcare, the environment, labor, urban construction and development, administrative reform, and culture.

Regarding the situation in the East Vietnam Sea, both leaders agreed to promote the peaceful settlement of disputes to ensure peace, security, navigation and aviation freedom and safety, in accordance with international law, especially the 1982 United Nations Convention on the Law of the Sea (UNCLOS).

At the end of the talks, President Quang and PM Abe witnessed the signing of several important documents, including a diplomatic note on non-refundable aid worth JPY745 million (US$6.77 million) for human resources development scholarships.

Vietnam promises to create a favorable and fair environment for Japanese investors, the Vietnamese leader stated.