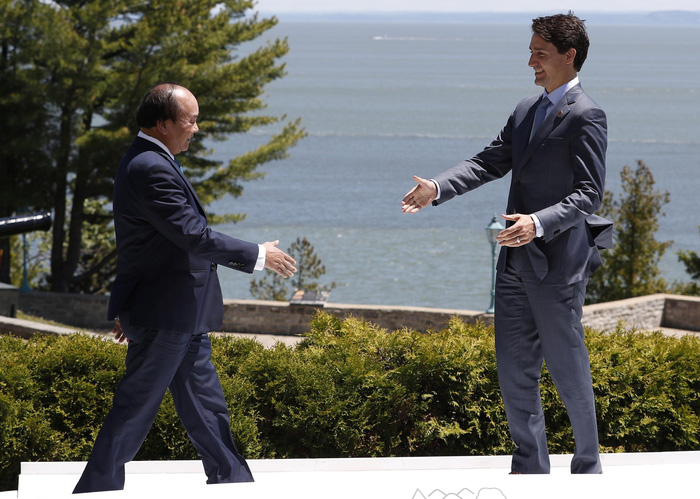 Vietnamese Prime Minister Nguyen Xuan Phuc has called on the protection of the ocean and marine ecosystem during his speech at the Group of Seven (G7) Outreach Summit in Canada.

PM Phuc attended the event in Quebec on Saturday afternoon (local time), or Sunday morning (Vietnam time), within the framework of his visit to Canada from June 8 to 10 at the invitation of Canadian Premier Justin Trudeau.

According to the Ministry of Foreign Affairs, this is the second time that Vietnam has been invited to the G7 Outreach Summit, indicating the country’s increasingly important role, contribution, and responsibility in regional and global issues.

The gathering is participated by leaders of the G7 member states, namely the United States, France, Germany, Italy, the United Kingdom, Japan, and Canada, along with the European Union, 12 guest nations including Vietnam, and several international organizations.

The event was centered on assessing challenges to the ocean, including pollution and unsustainable exploitation of maritime resources.

To cope with the issue, delegates agreed to continue implementing the Paris Agreement under the United Nations Framework Convention on Climate Change, sharing ideas and measures in their efforts, preventing coastal erosion and the rise of sea level, fighting illegal fishing, and developing sustainable sea-based economic activities.

They also backed Canada’s initiative regarding international cooperation in combating the release of plastic waste into the sea, and the promotion of gender equality in tackling climate change.

Speaking at the summit, PM Phuc expressed his full support for Canada having selected marine conservation as the central topic of the gathering, and praised G7’s determination in protecting the ocean.

Global collaboration is essential in dealing with climate change, the premier stated, adding that an expanded cooperation forum between the G7 member nations and coastal countries should be established to boost the efforts.

He suggested that the G7 promote the formation of a global cooperation mechanism for reducing plastic garbage, striving for the goal of oceans free of plastic waste.

The maintenance of maritime peace, stability, and cooperation is fundamental to achieving such goals, PM Phuc continued.

He praised G7’s support for ASEAN’s common stance on the peaceful settlement of sea-related disputes in accordance with international law, especially the 1982 United Nations Convention on the Law of the Sea.

On the sidelines of the summit, the Vietnamese head of government had the opportunity to meet with leaders of many countries and international organizations.