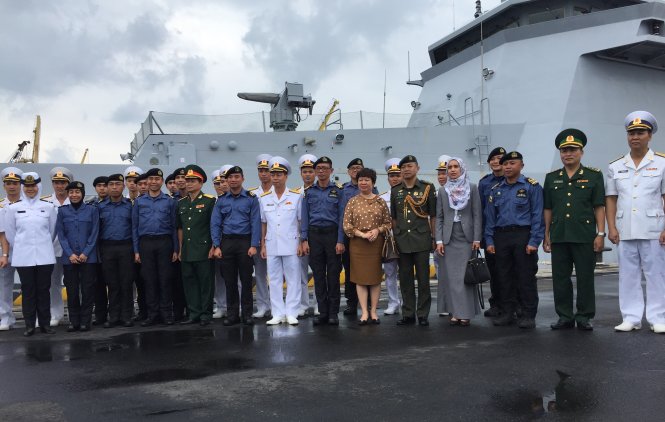 The Royal Brunei Navy ship KDB Daruttaqwa arrived at the city’s Tien Sa Port on Tuesday and is scheduled for departure on Thursday.

Headed by Lieutenant Colonel Mohammad Azrin Bin Haji Mahmud, the patrol ship has 76 naval officers and sailors on board.

The officers and crew members will meet officials from the municipal government and Vietnam’s High Command of Naval Region 3, a naval body that monitors waters off central Vietnam.

Football matches between the Bruneian officers and sailors and their Vietnamese counterparts will also be held.

The port call is considered a way to foster the multifaceted cooperation tie between Hanoi and Bandar Seri Begawan, which established diplomatic relations in 1992.

KDB Daruttaqwa, measuring 80 meters in length and capable of carrying up to 1,400 tonnes, is equipped with modern armament.

From September 17 to 21, the Japanese Maritime Self-Defence Force's submarine Kuroshio stayed at Cam Ranh International Port in Khanh Hoa Province, which is the first visit to Vietnam by a Japanese submarine.

The event, deemed to boost defense cooperation between the Southeast Asian and East Asian nations, was preceded by the arrival of South Korean destroyer ROKS Moon Mu the Great at Da Nang on September 11.