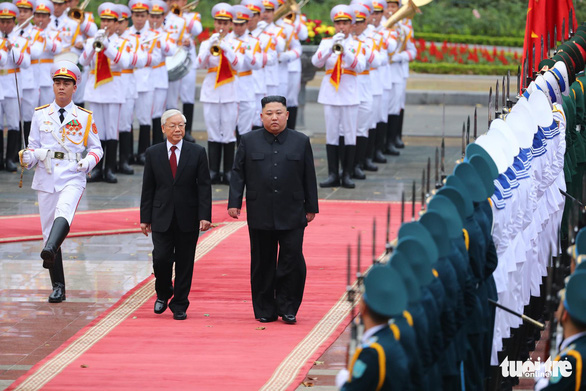 This is his first official friendly visit to Vietnam after he assumed his post in 2011.

Vietnam and North Korea established their diplomatic ties on January 31, 1950 and will celebrate the 70th anniversary of the relationship in 2020.

Following the ceremony, Chairman Kim and General Secretary Trong, along with delegations of high-ranking officials from both countries, were scheduled to join talks.

Chairman Kim left Pyongyang on his train on Saturday last week and arrived at the Dong Dang Railway Station in the northern Vietnamese province of Lang Son on Tuesday morning, before heading to Hanoi by car.

He has been staying at the Melia Hotel in the Vietnamese capital for meetings with President Donald Trump during the second U.S.-North Korea Summit, held eight months after they first met in Singapore in June 2018.

The high-profile leaders met at the Sofitel Legend Metropole Hanoi on Wednesday and Thursday.

No joint statement was signed between the two leaders, but President Trump said in a press conference on Thursday, before his return flight to the U.S., that he and Chairman Kim had an effective talk and discussed a number of issues.