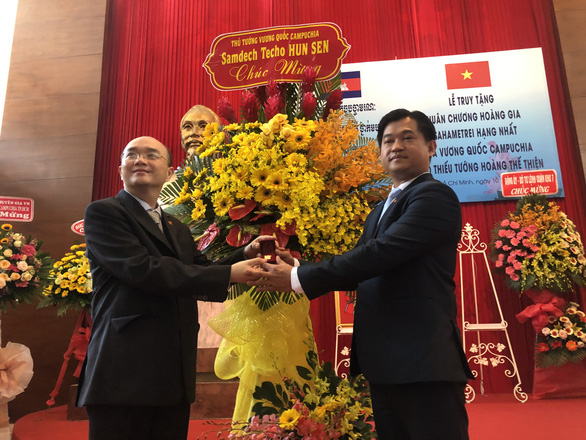 Cambodia awarded the Royal Order of Sahametrei to former Brigadier General Hoang The Thien for his great contributions to the development of the friendship of the two nations, during a solemn ceremony held in Ho Chi Minh City on Friday.

Between 1978 and 1982, Thien came to Cambodia for an international mission as head of a delegation of Vietnamese military experts to the neighboring country.

The dedication of the Royal Order of Sahametrei to former Brigadier General Hoang The Thien was made at the request of Cambodian Prime Minister Samdec Techo Hun Sen and approved by the Cambodian monarch.

Speaking at Friday’s ceremony, the Cambodian Consul General in Ho Chi Minh City Sok Dareth hailed Thien as “a hero” and “a brother” of Cambodian people.

On behalf of the Royal Government of Cambodia, the Cambodian Consul General expressed his deep thanks to the Party, the State, the Vietnamese people, and former Brigadier General Hoang The Thien for their contributions to Cambodia's victory over the genocidal regime of Pol Pot, and to Cambodian development.

Hoang Anh Thi, a representative of Thien's family who received the Royal Order of Sahametrei on his behalf, said that the late major general’s family feel honored and proud that he is remembered with the recognition.

The Royal Order of Sahametrei is a chivalric order conferred by the Government of the Kingdom of Cambodia.

It is conferred primarily on foreigners who have rendered distinguished services to the King and to the people of Cambodia, particularly in the field of external relations and diplomatic services or, as a token of friendship.

It is the first time that the Kingdom of Cambodia has awarded such a high honor to a Vietnamese for his great contributions to the country and people of Cambodia.