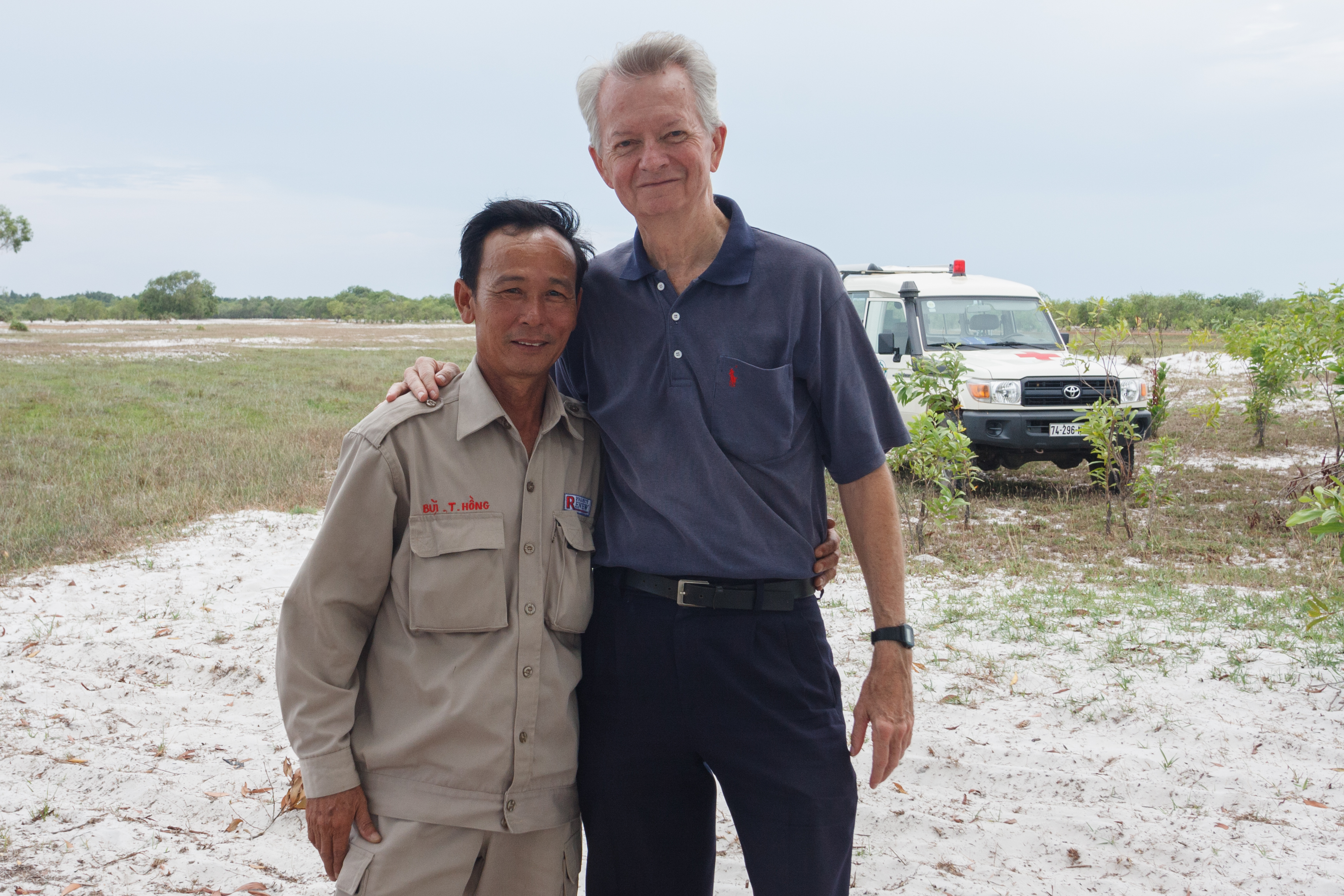 Editor's note:Chuck Searcy is an international advisor for Project RENEW, a joint effort by the administration of Quang Tri Province and international NGOs to mitigate the impact of wartime explosive ordnance in the north-central Vietnamese province.

Searcy is also the president of Chapter 160 of Veterans for Peace, an international organization made up of military veterans, military family members, and allies dedicated to building a culture of peace, exposing the true costs of war, and healing the wounds of war.

When President Bill Clinton announced on July 11, 1995 the normalization of diplomatic relations between the U.S. and Vietnam, Americans in Vietnam joined with Vietnamese and international friends to celebrate a new chapter in the painful history of our two nations.

To be sure, many issues were far from settled, especially the war legacies of explosive ordnance (EO) and Agent Orange.

But normalization permitted people of goodwill in both countries — veterans, scholars, peace advocates, and government officials — to move forward in a spirit of forgiveness, harmony, and mutual respect to create real progress on these thorny issues.

Many Americans had long felt that Vietnam had been treated unjustly in bearing the brunt of death and destruction during the war.

Three million Vietnamese had been killed, more than eight million tons of bombs rained down on the country, and 20 million gallons (75.7 million liters) of Agent Orange were sprayed on rivers, forests, and crops.

More than 100,000 Vietnamese had been killed or maimed by bombs and mines; some three million were still affected by the toxic poisoning of Agent Orange and other chemicals used by the U.S.

Normalization moved the agenda beyond a palpable pressure point, an impediment of timing and silence embodied by the excuse “when we have normalized relations” — at which time, presumably, serious engagement could get underway.

In that same year of normalization, 1995, Vietnam agreed for the first time to accept assistance from a U.S. non-governmental organization (NGO) to begin the daunting task of cleaning up EO in one location, Quang Tri Province in north-central Vietnam, the former DMZ.

That led to other efforts and more organizations coming in to help, and eventually funding from the U.S. government — something that had been pushed at every opportunity by U.S. veteran activists.

Visiting delegations from Washington, civic groups, students, and even tourists starting to come into Vietnam were confronted by the challenge of making Vietnam safe from the huge amount of dangerous ordnance still contaminating the entire country.

Americans were reminded that we bore much responsibility for the residual damage and the threat that remained. After all, it was mostly our ordnance.

Normalized relations permitted this robust discussion to become very public, and encouraged strong advocates to be vocal and insistent in demanding that the U.S. government be accountable, that we step up efforts to deal with this deadly threat.

More difficult was the issue of Agent Orange. This toxic chemical defoliant had been sprayed all over southern Vietnam, destroying not only vegetation but eventually affecting younger and older generations of Americans, veterans and their families, and Vietnamese.

A consensus had developed among the medical and scientific community that Agent Orange/dioxin was, indeed, a deadly substance and the long-term effects were frightening.

Yet the U.S. denied any connection between Agent Orange and human health. U.S. officials refused even to discuss the issue.

Normalization changed these dynamics, even though it took some time. Slowly a full and honest look at the truth, as best the medical and scientific community could discern it, permitted us also to consider the ethical and moral implications of the issue.

The result is that the U.S. has now completed one major dioxin cleanup project in cooperation with the Vietnamese government, at Da Nang International Airport, and another bigger mitigation effort is underway at the former U.S. airbase in Bien Hoa, near Ho Chi Minh City.

The U.S. has pledged more than US$60 million in assistance to families with severe disabilities, including those who may be affected by Agent Orange/dioxin.

This could never have happened prior to normalization of relations between our two countries.

The EO cleanup effort has expanded significantly and has achieved great progress. Some half million cluster bombs and artillery shells, grenades, and rockets have been disposed of or removed in the past 25 years.

The number of accidents, injuries, and deaths has gone down measurably. From an average of 70 or 80 casualties a year in Quang Tri Province over recent decades, in the past two years there has not been a single accident there caused by EO.

Twenty-five years after normalization of relations between the U.S. and Vietnam, we can look back with some satisfaction at the progress that has been made.

We have laid the foundation for another 25 years of cooperation, and we have increased the likelihood that 25 years from now, our children and grandchildren will look back over the years with some satisfaction and note that issues such as explosive ordnance and Agent Orange are no longer a threat to their lives and their livelihoods, or to their health and happiness.