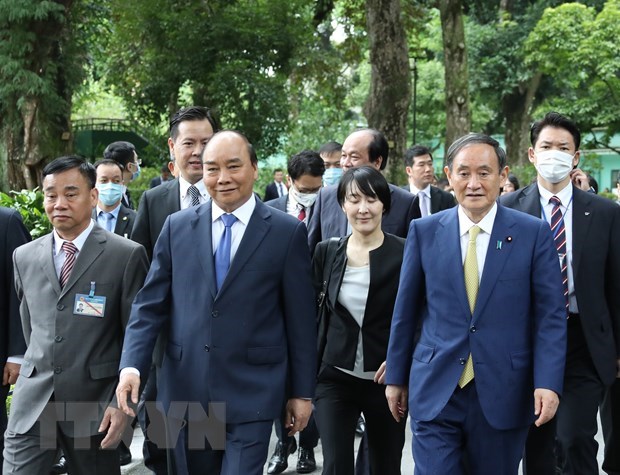 During the bilateral talks, Suga is expected to promote efforts to achieve a “free and open Indo-Pacific,” and agree with Phuc to facilitate the cross-border flow of medical supplies and other goods, Kyodo reported, citing sources of Japanese officials.

Japan is looking to diversify its supply chain to mitigate risks brought to light by the COVID-19 crisis, including its reliance on Chinese imports for face masks.

The government is handing out subsidies to firms that move production to Southeast Asia, which is both geographically well-placed and can provide relatively cheap labour.

Of the 30 firms chosen so far to receive the subsidies, ranging from manufacturers of medical gowns and disinfectant wipes to car engine parts, half are planning to set up shop in Vietnam.

The Japanese PM is also slated later in the day to make a policy speech at the Vietnam Japan University, which opened in 2016 with funding from both countries.

After meeting with other Vietnamese political leaders, Suga will fly to Jakarta on Tuesday, the second leg of his first foreign trip since taking office, for talks with Indonesian President Joko Widodo.