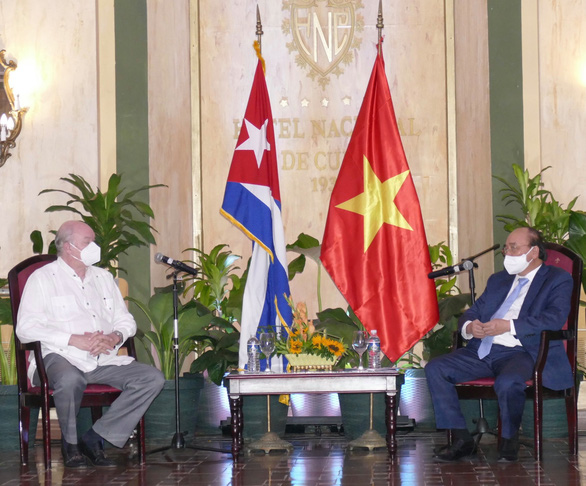 Vietnam inked deals to purchase 10 million doses of Cuban-developed vaccines against the novel coronavirus during the visit of State Present Nguyen Xuan Phuc to Cuba that ended on Monday.

“I am pleased to announce that Vietnam has signed a contract to buy 10 million doses of Cuban-made vaccines,” President Nguyen Xuan Phuc said during a meeting with the general director of the Mariel Special Development Zone (ZED Mariel) in La Habana, Cuba, on Monday morning.

With the signing of the vaccine procurement deal, the Cuba visit of the Vietnamese delegation was a success, demonstrating the special traditional relationship between the two countries, Phuc said.

Cuba will transfer five million shots of the Abdala vaccine to Vietnam while both sides also signed a memorandum of understanding on the purchase of five million doses of the Soberana 02 jab.

The Vietnamese government had issued a resolution on the purchase of the Abdala vaccine and assigned the Ministry of Health to proceed with the procurement and effective use of the jab in the fight against COVID-19.

The three-shot vaccine is developed by the Center for Genetic Engineering and Biotechnology (CIGB) and manufactured at AICA Laboratories in Cuba, using the same recombinant protein-based technology as Vietnam’s Nano Covax vaccine candidate, which is undergoing the procedures to be authorized for emergency use.

The ministry already granted conditional approval to the Abdala, the eighth after seven COVID-19 vaccines that have been given emergency use authorization in Vietnam, namely the UK’s AstraZeneca, China’s Sinopharm, Russia’s Sputnik V, the UAE’s Hayat-Vax, and three U.S. jabs including Pfizer-BioNTech, Moderna, and Johnson & Johnson.

Besides mentioning the vaccine deal as a success, State President Phuc told the ZED Mariel leader that Vietnam will promote investment in the special development zone in various fields, especially production of essential goods, high-tech industry, and infrastructure development.

The ZED Mariel leader said the zone now has three projects of Vietnam, including a US$37 million industrial park developed by building material group Viglacera, and is currently attracting the fourth project from the Southeast Asian nation.

On Tuesday morning, State President Phuc and his entourage wrapped up his three-day visit, during which he had talks with First Secretary of the Communist Party of Cuba Central Committee and President of Cuba Miguel Díaz-Canel Bermudez, Prime Minister Manuel Marrero Cruz, and Chairman of the Cuban National Assembly Esteban Lazo Hernandez.

State President Phuc has left Cuba for the U.S., where he will attend the high-level General Debate of the 76th session of the UN General Assembly (UNGA 76) and join a number of bilateral activities from Tuesday to Friday.

The meeting will be held in virtually from November 11-12