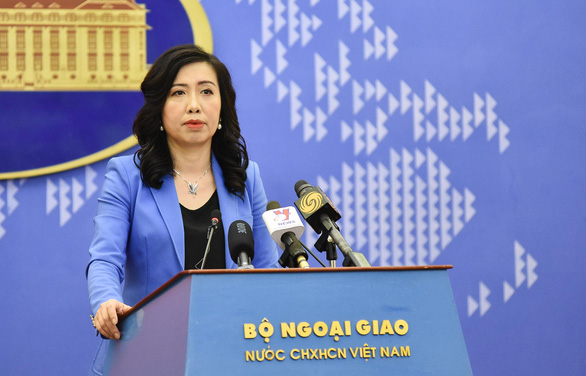 Vietnam adheres to the ‘one-China’ policy and hopes the relevant parties to exercise restraint and not to escalate tension in the Taiwan Strait area, the Vietnamese Ministry of Foreign Affairs said on Wednesday.

The foreign ministry’s spokesperson Le Thi Thu Hang was speaking at a press briefing in Hanoi in response to reporters’ questions about the current situation of the Taiwan Strait.

Nancy Pelosi, Speaker of the U.S. House of Representatives, had landed in Taiwan for a visit on Tuesday.

Reiterating that Vietnam continues to follow the ‘one China’ policy, Hang requested all relevant parties to contain themselves and contribute to maintaining peace and stability in the region and the world.

‘One-China’ means “there is but one China in the world,” stated the Chinese Embassy in Vietnam.

Taiwan is an inseparable part of China’s territory and the government of the People’s Republic of China is the only legal government representing the entirety of China, the embassy stressed.

Tension in the Taiwan Strait has been heightened after U.S. House Speaker Pelosi's plane touched down in Taipei on Tuesday evening, despite previous warnings from mainland China.

Pelosi’s visit to Taiwan is “a serious violation of the one-China principle and the provisions of the three China - U.S. joint communiqués,” China’s Xinhua News Agency cited the Chinese Ministry of Foreign Affairs in a statement on Tuesday.

Around 15 minutes after Pelosi arrived at Songshan Airport in Taipei, Xinhua News Agency reported that the Chinese People’s Liberation Army would conduct drills in six areas surrounding Taiwan from August 4 to 8.

A video aired later on the China Central Television showed the fighters taking off in the dark with missiles under their wings.

In a press conference held later at the White House, U.S. National Security Council spokesman John Kirby underlined that Pelosi's visit to Taiwan did not change Washington's stance on the ‘one-China’ policy, which recognizes Hong Kong, Macau, and Taiwan as part of China.

The visit was within Pelosi’s rights and did not violate China’s sovereignty, Reuters cited Kirby as saying.

The U.S. acknowledged the ‘one-China’ policy and established official diplomatic relations with mainland China in 1979.