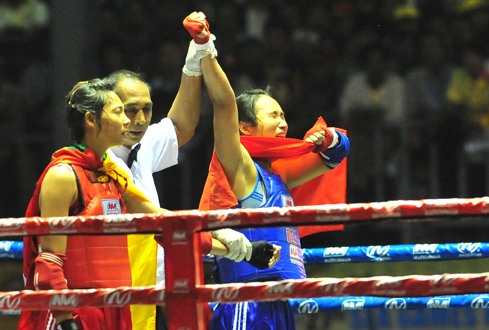 Vietnam on Saturday beat its target of bringing home 70 gold medals at the last day of the 27th SEA Games Myanmar 2013 with seven more golds secured by its martial artists.

This is also the last gold of the country, but it is more than enough for smashing the target set before the event.

With 73 gold medals, 85 silvers and 86 bronzes, Vietnam finished third at the 27th edition of the Southeast Asia’s largest sporting event.

Thailand surpassed host Myanmar to top the ally with a huge haul of 280 medals, including 106 golds, 94 silvers, and 80 bronzes. Myanmar came behind with 84 golds.

Below are the last highlights of the event for the Saturday’s competitions, compiled by the organizers.

Thailand extend their record to 14 gold medals in the SEA Games men’s football by beating Indonesia 1-0 in front of a vociferous crowd of 3,150 at Zeyarthiri Stadium last night.

Thailand finally broke through at traditional boat race on Saturday, winning gold in the men’s 20-crew 2000m race by 2 and a half seconds over silver medalists Myanmar.

But Myanmar, which has won the golds except one on each day of racing, paddled back onto the top of podium in the women’s 20-crew. The Myanmar women ended in 8:23.330, almost 3 and a half seconds ahead of silver medalists Indonesia. Thailand got bronze in 8:30.356.

In the regatta’s, and the 27th SEA Games canoe/kayak, rowing and traditional boat race, finale, Myanmar came from more than a boat-length behind at 1750m to haul in a surging Indonesia and win the mixed 20-crew gold medal by barely a dragon’s head. Myanmar paddled the 2000m in 7:44.167, silver winners Indonesia in7:47.200.

Thailand, just 2 seconds behind Indonesia, got bronze in the day’s, arguably the regatta’s, most thrilling race.

In hockey at Hockey Field Yangon, Myanmar won the men’s bronze with a 3-1 victory over Thailand.

Malaysia devastated Singapore 9-0 to win the gold. Singapore got silver.

Kumi embu gold went to Indonesia, silver to Timor-Leste and bronze to Laos.