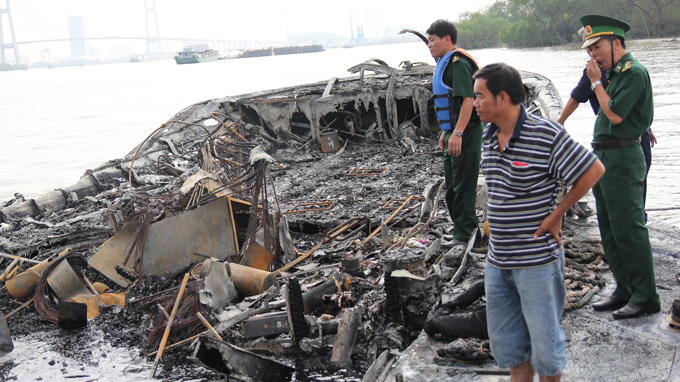 Authorities in Ho Chi Minh City have ordered the suspension of operation for all hydrofoils in the city pending checks starting from Jan. 21 - one day after a hydrofoil carrying 85 passengers on board caught fire on the Saigon River.

>> 37 foreigners among 85 passengers on hydrofoil that caught fire

Le Hoang Quan, chairman of HCMC People’s Committee, announced the decision at a meeting on Tuesday. He also asked local police to immediately set up an investigation team to fully probe this incident.

Quan requested the Ministry of Transport and other concerned authorities to verify units responsible for this incident (if any).

Tat Thanh Cang, director of HCMC Department of Transport, said he has suggested to higher authorities many times that hydrofoils that are too old should be banned from operating.

Quan commended and rewarded VND10 million in cash (roughly US$500) to a fishing boat owner in District 7 for saving dozens of passengers as the boat was sinking.

Loc said an estimated 2,000 liters of oil is spreading around the scene. But he asserted that it is under control.