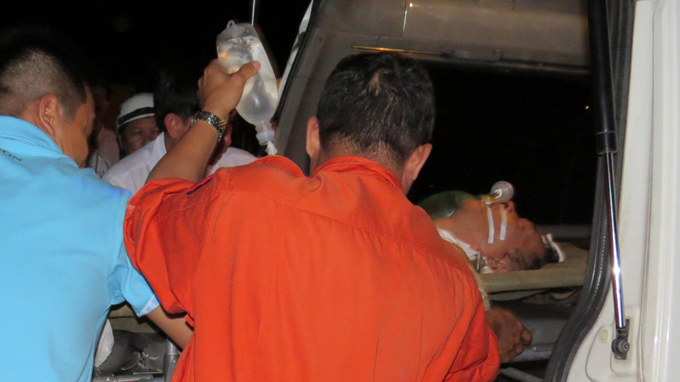 On Monday evening, a Vietnamese maritime search and rescue center took ashore a South Korean crewmember of a cargo ship off Nha Trang city who was in a coma caused by an head injury.    The victim is Choi Sung Hwa, 59, chief mechanic of the Panama ship CS Daisy, which sent messages for help when it was carrying cargo from Hong Kong to Singapore. The man was taken to the Nha Trang Port at 9:45 pm on Monday by the rescue boat SAR 27-01 belonging to Vietnam’s Maritime Rescue Coordination Center in Zone 4. He was then rushed to the hospital in an ambulance for emergency treatment.   Nguyen Xuan Binh, deputy director of the center, said the center received the SOS message from the foreign ship, which was then 150 nautical miles east of Nha Trang. The center later instructed the ship to go ashore and at 3:30 pm Monday, the center sent the rescue boat SAR 27-01 out to sea to rescue the victim.  At 7:45 pm Monday, facing winds of up to 49 kph, the rescue boat got close to the foreign ship 25 nautical miles east of the Nha Trang seashore. The rescue boat then received the foreign man and safely took him ashore two hours later. Nha Trang is the capital city of south-central province of Khanh Hoa, about 450 km northeast of Ho Chi Minh City.

A similar case happened in late 2013 when rescuers from the same Maritime Search and Rescue Coordination Center took ashore a Japanese woman and an Indonesian man who suffered from serious health conditions while on board a yacht off  Khanh Hoa Province.

The woman, Michiko Gamamuchi, an 81-year-old tourist, and the man, Mahmudi, 49, the boat’s mechanic, were taken to the Nha Trang Port on November 28 and were brought to the Khanh Hoa General Hospital.

Michiko broke the spoke bone and wrist bone of her left arm while Mahmudi suffered from heavy gastrointestinal bleeding when their boat, Ocean Dream, with Panama nationality, was on a journey from China to Singapore.