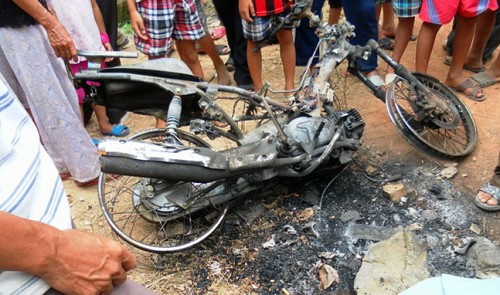 The People’s Court of north-central Quang Tri Province on Friday  imposed sentences up to three years in jail on ten local men who beat two suspected dog thieves to death in 2012.

>> Which is more valuable: human or pet life?>> Dog thief clubbed to death by villagers Accordingly, Nguyen Dang Truong, 28, received the heaviest sentence (three years), while Tran Van Tien, 24, Tran Van Trung, 26, Nguyen Dang Quy, 41, and Nguyen Dang Loi, 41, were each sentenced to two years and six months in jail. Of the remaining five defendants, one got two years in prison and the others each received a suspended sentence of two years. All the convicted, from the same commune of Gio Thanh, Gio Linh District, were charged with intentional assault that led to the death of Nguyen Xuan Trieu, 41, and Nguyen Dang Cuong, 31, both of central Quang Binh Province. According to the indictment, Trieu and Cuong were said to have gone on a motorbike to a rural village in Quang Tri’s Gio Linh District, at around 1:30 a.m. on August 29, 2012 to steal dogs. On hearing the dogs bark loudly and the sound of the motorbike, three of the ten above defendants rushed out and chased the two men. A large number of other locals later joined the chase for the suspected dog thieves. After fleeing for around two kilometers, Trieu and Cuong fell off the motorbike and were seized by the angry residents, who beat them brutally with hands, sticks or whatever they could reach.  When the police showed up, the two victims passed out and they were rushed to the hospital but died on the way. After months of investigations, local police seized the above defendants and prosecuted them on charges of “intentionally inflicting injury on or causing harm to the health of other persons” under Article 104 of the Penal Code. At yesterday’s hearing, some of the defendants claimed they had not committed the charge stated in the indictment, but the court rejected their claims, confirming that the evidence related to the case was enough to charge them with intentional assault. The court also ordered these defendants to pay all the costs related to the burial of Trieu and Cuong and make monthly payments of VND500,000 to each of the two children of the victims until they reach 18 years old.

A similar case occured in central Nghe An Province on June 10, 2013 when two suspected dog thieves were beaten cruelly by residents in Tan Thanh commune. The beating left one of the two suspected dead and the other seriously injured.