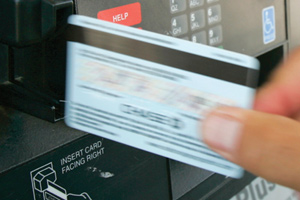 Hanoi police have arrested a Chinese man who belonged to a ring that counterfeited ATM cards and used them to withdraw money from ATMs of different banks.

After a month-long investigation, a police team in charge of high-tech crime in the capital caught Feng Hai Qiang using a fake ATM card to withdraw money from an ATM in Thanh Xuan District on Wednesday.

The police searched his body and his handbag, seizing 14 fake cards and VND6.5 million (US$305) he had earlier withdrawn from the machine, said Major Ngo Minh Quang, head of the police team.

On searching Feng’s residence in Hanoi later, the police found and confiscated a lot of equipment for use in faking ATM cards. The Chinese man admitted he and his accomplices had used bogus ATM cards to withdraw at least VND100 million ($4,700) within a month. Feng told investigators that after arriving in Vietnam, he and some members of the ring utilized high-tech devices to steal the personal information of cardholders from many ATM booths in the capital. They then used the stolen information to forge cards with high-tech equipment and employ them to appropriate the money of their victims. The police said they are hunting for Feng’s accessories and expanding their investigation to identify the victims as well as clarify how much money the ring has actually stolen. This is the first case that has been uncovered in Hanoi in which the victims are Vietnamese, not foreigners as in many similar previous cases, police said. But this is not the first time that a Chinese national has committed this kind of crime.    Last year, the Hanoi People’s Court sentenced a Chinese man to 30 months in prison for stealing ATM card information and using it to counterfeit cards to steal money from cardholders.

Through such offenses, the 32-year-old man, whose name in Vietnamese is Ngo Van Tong, was convicted of “appropriating the State’s secrets.”