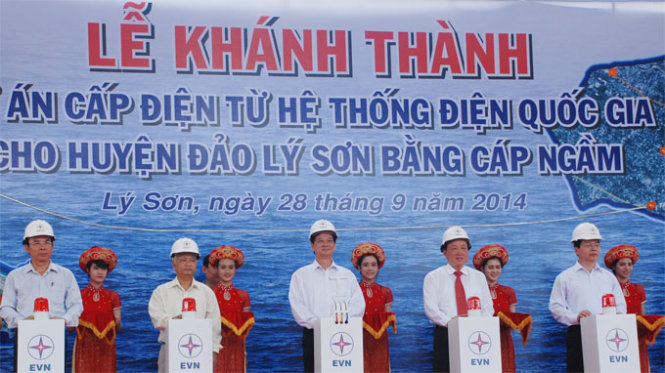 An underground cable system connecting Ly Son Island, in the central province of Quang Ngai, to the national electricity grid was inaugurated on Sunday to provide steady power to islanders.

>> Vietnam President asks northern island soldiers to be ready in all circumstances Prime Minister Nguyen Tan Dung initiated the operation of the system to provide power to more than 22,000 people living on the island. Islanders can now enjoy a reliable supply of electricity around the clock, instead of only six hours a day, as in the past.  The power supply project cost VND678.7 billion (US$32.02 million).  It comprises 16 km of overhead 22 kV line, 26.2 km of underground cable, and 15 transformer stations with a total capacity of 3,330 kVA on the island.  The project broke ground last year and was completed nearly a month ahead of the set schedule of 225 days, said the Central Power Corporation, the investor of the project.

This project makes Ly Son the third island district in the country to join the national power grid, after Co To in northern Quang Ninh province and Phu Quoc in southern Kien Giang province. In addressing the ceremony, PM Dung praised the efforts of contractors, workers and relevant agencies in ensuring the safety, quality and efficiency of the project. This power supply will help boost the socio-economic and cultural development of the island, improve residents’ living conditions, and contribute to the defense and security of the island district, the premier said.  Pham Thi Huong, deputy chairwoman of the district People’s Committee, said that the power from the national grid will promote investment in the development of fishery logistics services, thereby helping to tap the potential of the district’s sea-based economy. The new power source will also enable local armed forces to operate military machinery and equipment to protect the island and contribute to the protection of the country’s sovereignty over its seas and islands, Huong said.