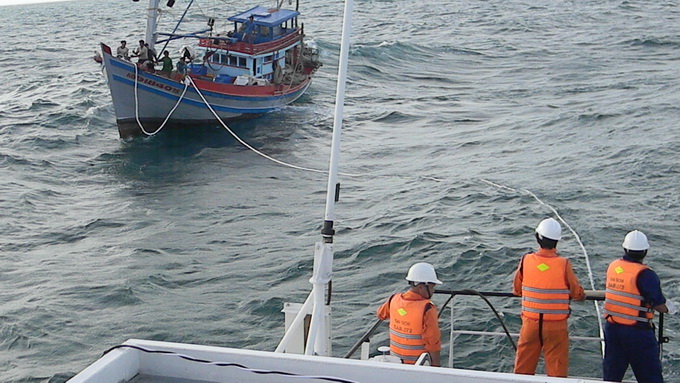 Vietnam fishing boat returns after being missing for eight days

After eight days of being reported missing, a fishing boat based in the southern province of Kien Giang, with four fishermen on board, has been confirmed to be on its way to the mainland.

>> Six Vietnamese sailors missing off Japan identified search halted>> Malaysian vessels ram Vietnamese boat, leaving one fisherman missing The Lam Hong, coded # KG-61734-TS, which was reported missing on October 29, was 15 nautical miles off the province’s Tho Chu Island, Senior Lieutenant Colonel Duong Quang Hoa, at the province’s Headquarters of the Border Guard, said at 7:15 am this morning, November 6. Hoa, citing a report from the ship’s owner, Nguyen Van Du, said that the vessel’s engine broke down when it was sailing past Hon Tre Island, off the province’s Kien Hai District on October 29. Crewmembers tried to repair the engine but they were unable to get the vessel going, leaving the ship drifting towards international waters. At that time, the telecommunication system on board was not working, and crewmembers tried to use cell phones to contact the ship’s owner on the mainland could not get a signal. After Du reported that he had lost contact with his ship, the Kien Giang Province Coastal Information Station sent SOS messages to competent agencies. The vessel was found after a search effort and it is on its way to the mainland, Hoa said. “We have directed the border guard station on Tho Chu Island to prepare to receive the ship, investigate the incident and submit a report about it,” the official said.